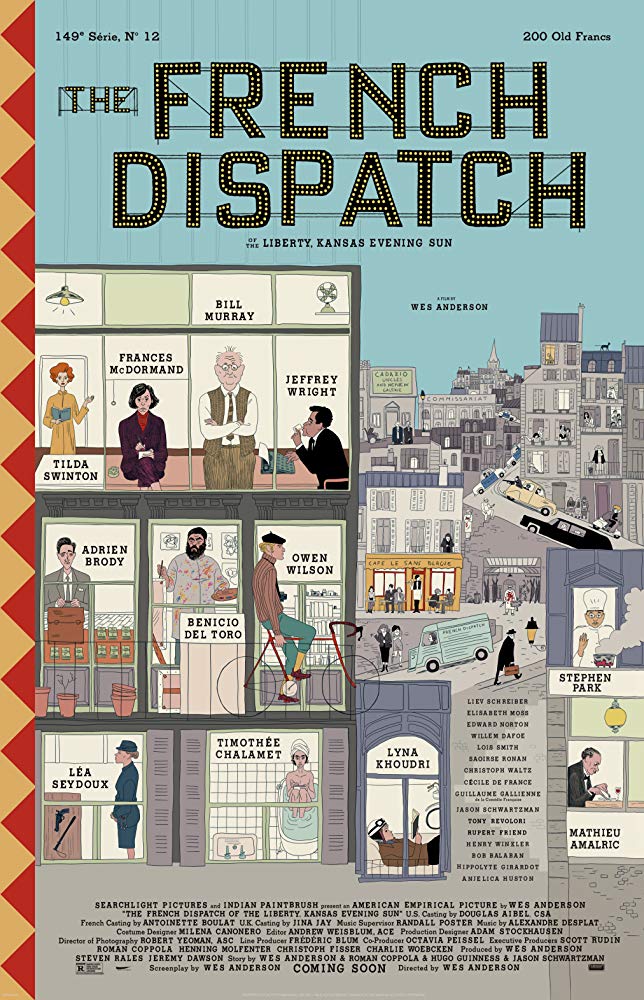 Plot: A love-letter to journalists, The French Dispatch follows an American newspaper set in a fictional 20th-century French town. The films plays out a series of vignettes reflecting the stories in the final issue. -- Chris Kavan

The most Wes Andersony Wes Anderson movie that Wes Anderson has ever made, "The French Dispatch" is a lively and reshaped anthology done with its director's signature style and wit.

Love-Letter to Journalists in Anderson Style

I'm an unasbashed Wes Anderson fan and really wanted to see this in theaters, but, alas, never got the change. Still, the film lost none of its Anderson flair at home as the visuals and Anderson's signature style - including a great animated sequence - really pop.

The French Dispatch is made up of three distinct stories told from the point-of-view of the reporter of said story - bookended by the making of the final issue of said paper due to death of owener Arthur Howitzer, Jr. (Bill Murray). Before the first major story, we are introduced to the French community of Ennui-sur-BlasÃ© (entirely fictional but filmed in the very real city of AngoulÃªme) in a cycling commentary from reporter Herbsaint Sazerac (Owen Wilson) - who compares the old and current districts as well as not …

The French Dispatch is as quirky and offbeat as expected for a Wes Anderson movie.

Just as The Grand Budapest Hotel was a pastiche of interwar European literature, The French Dispatch seems enamored by the mid-century artistic and political revolutionary attitudes.

But its three part structure telling three different stories feels disjointed. These segments are amusing on their own but together they appear to be unfocused.

Visually, itâs quite marvelous to look at. Every other shot is beautifu as the last. Set in a fictitious part of France, the sets and visual effects create this environment that seems at once unchanging then experiencing turmoil and upheaval.,

Aside from the visual style, the cast does help elevate the movie. Given how huge the ensemble is, some come …

A video review of The French Dispatch: