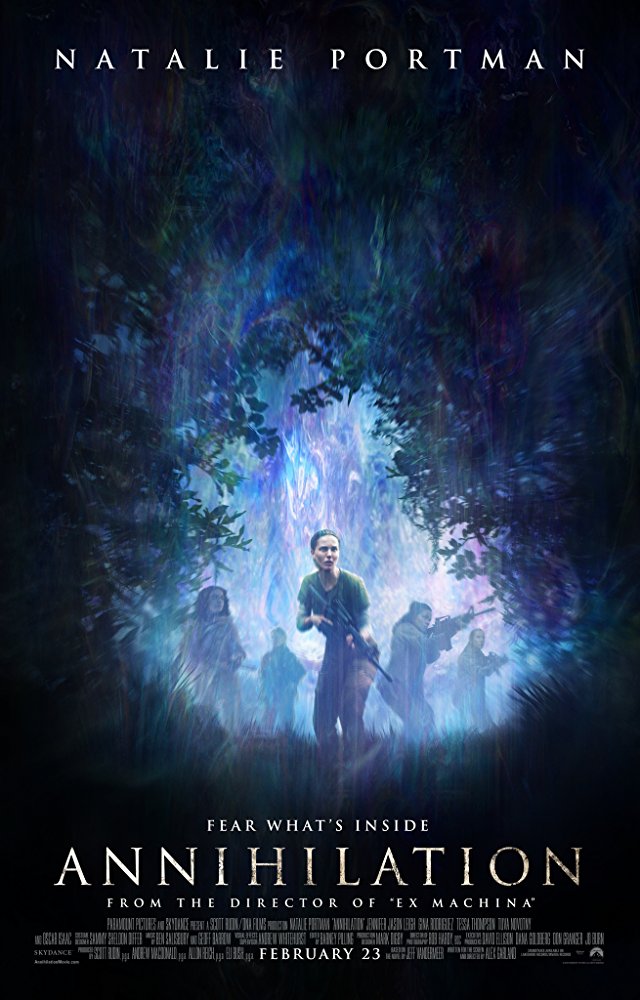 Plot: Seeking answers to the whereabouts of her husband, a biologist joins a group of women on a dangerous expedition to a place known only as Area X. Area X is like no other - surreal, beautiful and extremely dangerous, where the laws of nature no longer apply. -- Chris Kavan

Alex Garland follows up the incredible "Ex Machina" with an almost equally impressive survival horror sci-fier about the fear of the unknown.

A sci-fi film with a trippy twist - and some of the most interesting visual effects this year. Alex Garland is no stranger to great sci-fi - as Ex Machina is one of my personal favorites - and while Annihilation may be a bit too intellectual for the standard mouth-breather who enjoys Fast and Furious films, for those willing to exercise those brain muscles a bit, it's a real, strange trip - one that opens the doors to many possibilities.

A special forces soldier who was assumed K.I.A. reappears with no memory of where he has been since entering a mysterious zone of extraterrestrial origins from which nobody had previously returned.

Alex Garlandâs follow up to his acclaimed debut Ex Machina has a similar formula of low key, old school cerebral science fiction that is refreshingly different to the incessant fast cuts and pyrotechnics of the modern blockbuster. Slightly reminiscent of Gareth Edwardsâ debut Monsters because of the forest setting, road movie format and beautifully artful visuals, the story is of the âexplorers investigate unexplained anomalyâ variety that will be familiar to fans of Star Trek. There is also something of a horror twist concerning a theme of the corruption of the flesh â a …

âBlackwater National Park reported that a lighthouse was surrounded by something they termed âa shimmer.â
One of the wardens went in to investigate.
Never returned.â

Let me get right to the point. âAnnihilationâ isnât exactly an easy SF. This horrifying SciFi can join the group of âthe more intellectual looking SF filmsâ where âArrivalâ can be found as well. The more subtle form of SF, where you wonder all the time what is actually going on (just like the protagonists in this movie). And in the end you still have a lot of questions. In terms of imaging, it looks like âPredatorâ mixed with influences from âInvasion of the body snatchersâ. And it all takes place in a giant soap bubble. One moment the group of five women stumble through a jungle where they …

Refractions of Life in the Smart Sci Fi Genre

In recent years weâve seen the rise in a tendency that has come to be known as âsmart science fictionâ. Movies like âArrivalâ, âInterstellarâ, âLooperâ, âEx Machinaâ, even âMad Max: Fury Roadâ are clearly genre pieces, but they seem to rely heavier on the ideas they are portraying rather than the high-concept eye-candy that is characteristical to the genre. Whether these films are truly smart or not is up for debate, but the tendency is clear. Alex Garland, director of one of the aforementioned films, namely âEx Machinaâ, is back this year with another project that fits this mould. Boasting great visuals, a thought provoking story and a strong central performance by Natalie Portman, Annihilation rises as an early candidate for one of the yearâs …

No posts have been made on this movie yet. Be the first to start talking about Annihilation!