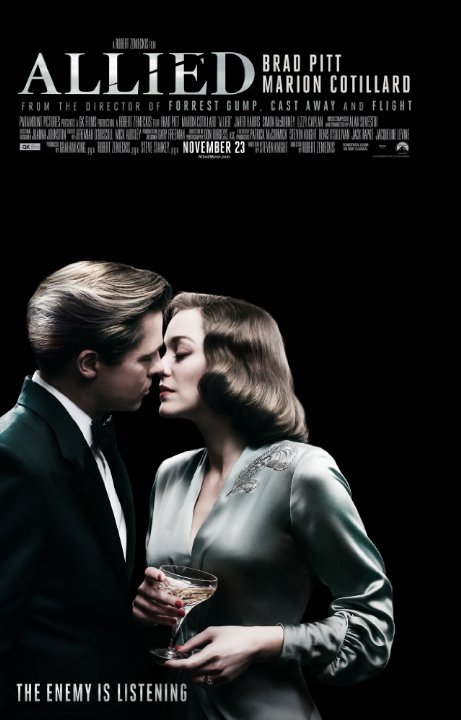 Plot: Explores the relationship between intelligence officer Max Vatan and French Resistance fighter Marianne Beausejour as they meet behind enemy lines during WWII in North Africa. They reunite later in London but find everything is complicated by the pressure of war. -- Chris Kavan

Although the story doesn't really soar, "Allied" holds up thanks solely on Robert Zemeckis' knack for stylistic panache.

Robert Zemeckis continues his apology tour for spending near a decade directing motion-capture animation with the glossy spy thriller ALLIED. Starring one of Hollywood's most charismatic actors and one of international cinema's best actresses, the story aims for a sweeping romantic scale in the vein of CASABLANCA and NOTORIOUS.
If only it reached that same level. It's not terrible and the acting is fine but ALLIED is a tad too clean-cut and familiar. Given the talent involved, this would prove disappointing for some but there's some good things to be appreciated. As I said before, Brad Pitt and Marion Cotillard are good in this if their romance is still too rushed to believe it's real. There are brief moments of violence and action in the plot. The second half becomes a different movie …

No posts have been made on this movie yet. Be the first to start talking about Allied!