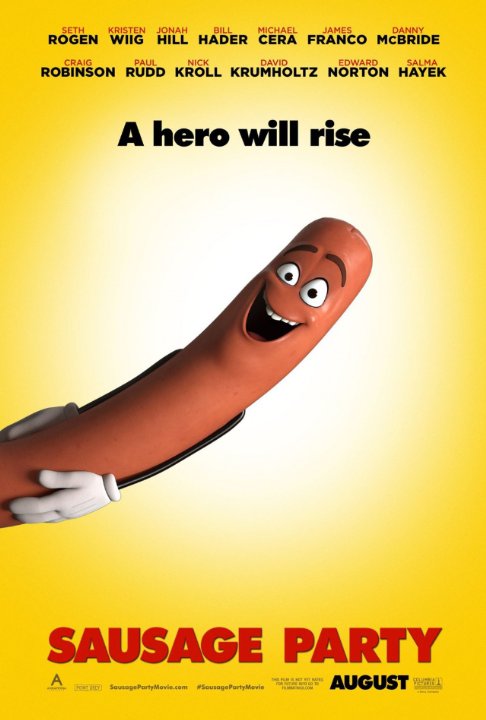 Plot: A lone supermarket sausage wants to know the truth about what happens when the "chosen" leave the grocery store. Enlisting the help of some fellow products, he won't stop until her learns the truth - no matter how down and dirty things get. -- Chris Kavan

Suitably raunchy, irreverant, and surprisingly thoughtful, Sausage Party works as the adult alternative to every CG family movie released. It doesn't overstay its welcome and if you disliked one joke or one-liner, there's two more you'd probably enjoy afterward. The vocal talents are all funny and the ending is a great sequel tease.

A 'Party' for Everyone

'Sausage Party' sees Rogan and company tackle animation. Their particular brand of sophomoric humor is all over this one, as expected. What's not as expected is the satirical ways in which they use this simple premise to full effect. On the surface we have food puns, crass jokes, and all the sexual references one can make with edible objects. But beneath the self-aware juvenile exterior is a story with actual meaning. Our sausage hero comes to find that the "gods" (grocery shoppers) they worship and believe will one day take them off the shelf to spend a happy eternity, actually just plan on murdering them. Thus proving there is no afterlife beyond the supermarket. He takes it upon himself to warn everyone else, but that's the hardest task. Instead, the film opts to spread a …

No posts have been made on this movie yet. Be the first to start talking about Sausage Party!