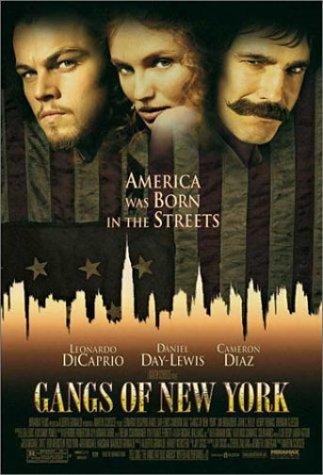 Plot: Takes place in Nineteenth century Manhattan where immigrants fight for control over the five-points neighborhood.

A most resonating film, "Gangs of New York" lays a revenge story against a period drama with relevant modern themes.

The movie takes place in Nineteenth century Manhattan where immigrants fight for control over the five-points neighborhood. This movie has a strong taste of history mix with killing and wining. the acting is brilliant and the directing is great as always.

Gangs of New York is a movie of astonishing imagination, ambition, and scope. It disappointing that it started out brillant and features a career-topping performance from Daniel Day-lewis only to descend in quailty with a flawed ending.

One of Scorsese's weaker works.

I am a big Martin Scorsese fan, and I love a good period piece, and I don't know where it fell short, but this movie felt like it was missing something.
Daniel Day-Lewis and Leonardo DiCaprio are two of my favorite actors, and here they do a phenomenal job. They just have nothing to back them up.
The whole movie feels like it has no ambition, like it's afraid to do something. Barely anything happens after the stunning opening war sequence.
Revenge is (In the words of Quentin Tarantino) one of the classic staples of drama. Yes, it is very much so. But here, it feels like another plot device to fill the runtime. We are supposed to care for Amsterdam Vallon, whose father was killed by Bill Cutting in the opening, but he does virtually nothing when he comes face to …

Scorsese at it again!! Best Director Ever??

If there was ever a doubt of Scorsese's talent and storytelling ability this film puts those doubts to rest. It is obvious from the first scene and the first line all the way through to the ending credits that Scorsese put every fiber of his being into the telling of this epic story of crime, politics, social class, poverty, and gangwarfare set in New York City in the midsts of the turmoil of the Civil War. The shadow of this grand historic event looms above the entire film, but the real story is told in the relatively small area of the Five Points slums and alleys where our characters live and die by ancient codes and rules that few outsiders would ever understand. But Scorsese's will and talent is also backed up by an amazing cast of characters who give the characters a life and …

Not bad but unfortunately not great.

I was very pumped up to see Gangs of New York. It seemed to be that Scorsese was making an epic about the city he had grown up in and set most of his movies in, and I didn't think there was any way he could fail. Unfortunately I was only partially right. There are parts of GONY that are spectacular. Daniel Day Lewis, the direction, the story, the cinematography, the sets, and the editing are all wonderful. There are two major problems. Leonardo DiCaprio and Cameron Diaz. They are both horribly mis-cast and that's a big problem. Cameron Diaz as the street wise prostitute, I don't think so. Leonardo DiCaprio going toe to toe with Daniel Day Lewis. Leo's good, but DeNiro might get eaten up by DDL. All in all the film was a let down and I was glad to see Scorsese and DiCaprio bounce back …

No posts have been made on this movie yet. Be the first to start talking about Gangs of New York!