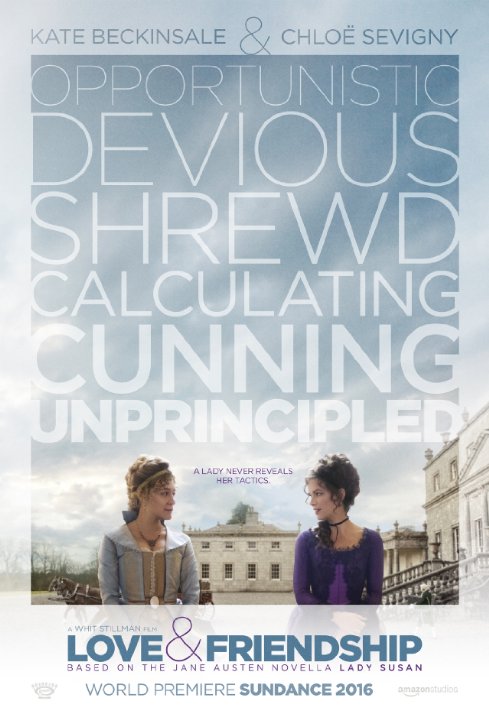 Plot: In the 1790s, the widow Lady Susan Vernon decides to visit the estate of her in-laws while rumors of her dalliances dies down. While there, she is determined to find a match for her debutante daughter, Frederica and maybe herself as well. -- Chris Kavan

It won't be everyone's cup of tea, but "Love & Friendship" brings classiness with a surprising amount of elegant humor.

Kate Beckinsale reminds everyone that she's a good actress aside from being tough-as-nails in this meandering but well made period romance. Based off a Jane Austen work no less, it's the type of movie you don't see made that much anymore even among the Brits. The movie clocks at only 93 minutes and the script moves fast. It only really has a plot when cast member Tom Bennett shows up as the foppish dandy Sir James whose presence ruins all the burgeoning love stories in the first act. He's hysterically stupid that he nearly steals the movie. The story goes in unexpected directions and unlike a lot of these types of films, it has a wicked sense of humor.

I generally love Whit Stillman and I generally hate Jane Austen adaptations, so I wasn't sure how I'd feel about this one. But while most Austen adaptations lose a lot of her sharp, satirical edge and turn her stories into soupy romances, this movie felt even sharper and more biting than Austen herself... More like Dangerous Liaisons than Sense and Sensibility. I'm not sure how much of that is due to Stillman, and how much of it is original to Lady Susan, which I haven't read (now I must!). Either way, the movie was great gobs of fun, if not quite as heart-wrenchingly relatable as the Metropolitan saga.

A period-piece drama with a comedic bite - based on a story from Jane Austin. Adaption of the time and place are impeccably authentic. Austin's signature sensibilities are in full force, with situational comedy relying on the subtle manipulative powers of it's lead female and much witty dialogue. There's a lot to grin at, but there aren't many solid laughs. Only when a certain dimwitted character shows up occasionally does the film actually feel like it's coming alive. I felt a great distance from characters; something which I've found in all of writer/director Whit Stillman's films. There's less enjoyment to be had when watching privileged rich persons do little of value or consequence. That said, it's a perfectly fine film that does exactly what it sets out to in a precise and …

No posts have been made on this movie yet. Be the first to start talking about Love & Friendship!