The Fate of the Furious Movie Information 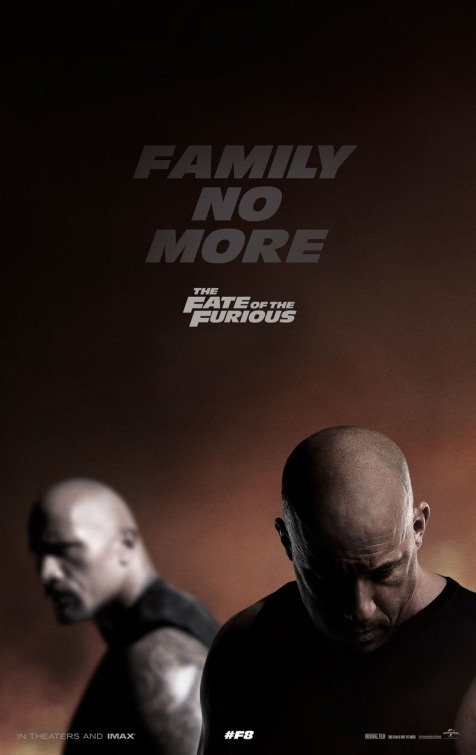 Plot: The crew has gone their sepearte ways. Even though Dom has seemingly found a sense of normalcy with Letty, he is seduced by a beautiful woman and enters back in to a life of crime, and, in turn, betraying those closest to him. The most dangerous mission yet - from Cuba to New York to the arctic Barents Sea, is not just to prevent catastrophe, but to bring a man back home who has lost his way. -- Chris Kavan

Just as crazy as the other movies in the franchise. The action is wayyy ott and the stunts are awesome. The cast is having a good time. But I'll admit that at well over two hours, it does overstay its welcome.

Fate of the Furious continues to ramp up the action, and though the actors, and their characters, continue to have a great time (especially teaming Jason Statham with a very expressive baby), it's getting a bit harder to enjoy for the sheer audacity of the over-the-top action. It's still fun, but it's starting to wear thin - reel it in a bit, F. Gary Gary, I like action as much as the next guy, but even I have my limits.

I just wanted to say that I do not know how but even after 8 movies they still find a good plot and lots of actions I heard there was gonna be a 9 and 10? And then The Rock is doing his own spinoff movies from his character.

Fate of the Furious - Review

"I'm gonna knock your teeth so far down your throat you'll have to shove a toothbrush up your ass to brush em'."

How do you review a movie like this without being too critical. Like yeah, it's loud, stupid, and nothing makes sense. But that's what you expect by now if you've been following the series. It's simple entertainment and the film dose it's job well of doing just that. For me, it was a blast to watch and it had me smiling.

I always enjoy the energy and the ridiculousness of these movies. Really pushing how far you can take this series. You've been with these characters for so long, the crew really do feel like family.

Can I just say that the scenes between Dwayne Johnson and Jason Statham are the highlight of the film. The back & forward insults are so silly, but …

No posts have been made on this movie yet. Be the first to start talking about The Fate of the Furious!