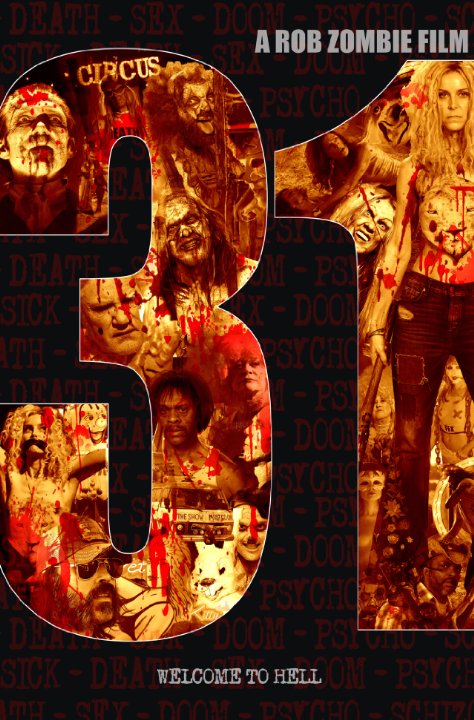 I'm not a real hardcore Rob Zombie fan. In a dark past, I saw "House of 1000 corpses". A kind of "Texas Chainsaw massacre" story, where a group of nobodies fall into the hands of a crazy family. And a few years ago I saw the not so brilliant "The Lords of Salem" with a pack of elderly witches haunting a local female disc jockey. Far from impressive and filled with absurd scenes. The most exciting part were the seductive curves of Zombie's wife (Sheri Moon Zombi). And that's all I knew about Rob Zombie's oeuvre. Had I known this was another movie from him, perhaps I would have skipped it. It may sound a bit morbid, …

"31" is your typical Rob Zombie film that if you've seen one film, then you seen it all.

So yeah, I'm not the biggest fan of Rob Zombie. The only movie I like from Rob is "The Devil Rejects" and that's it. There's something about Robs work that doesn't click with me, but hey, that's just me.

But what made this movie watchable is Richard Brake as Doom head. He was pretty damn amazing in this and at times I saw a little bit of the Joker in him. Well, he should have been the Joker and not Leto, because he's madness feels natural and not forced. He's violent and he loves every second of …

No posts have been made on this movie yet. Be the first to start talking about 31!