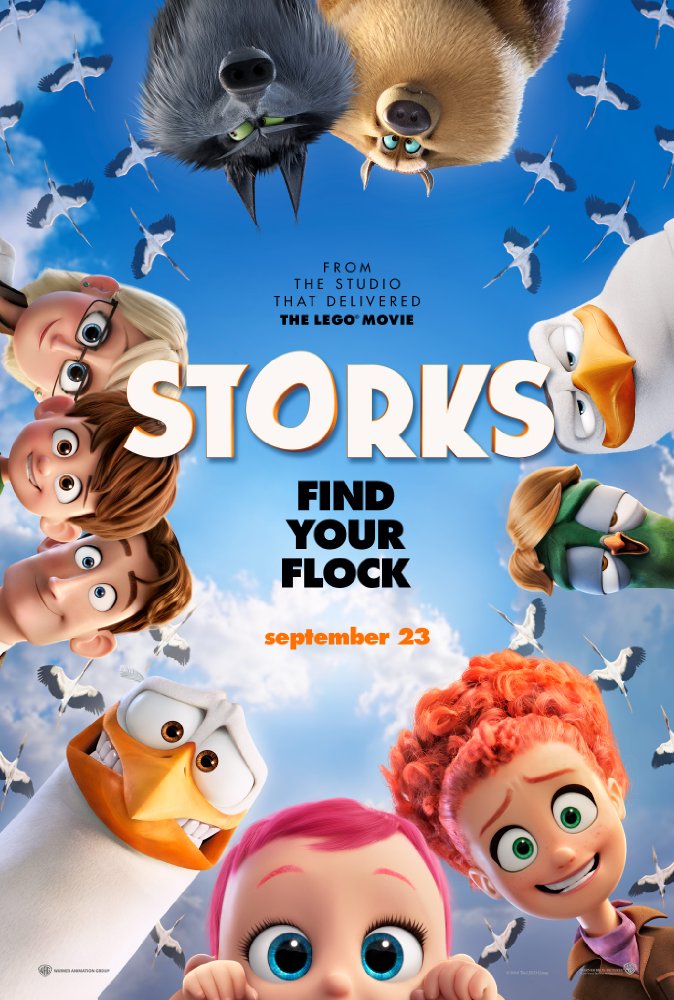 Plot: Everyone knows storks delivers babies - at least they used to, now all the storks works for the internet giant Cornerstore.com. But when a top stork delivery agent, about to be promoted, accidentally activates the Baby Making Machine, he is left with the cutest bundle of joy - a wholly unauthorized one at that. Now, he needs to find a way to give this baby a new home before his mistake is found out. Teaming up with the only human around, Tulip, he races to complete the first baby drop in a very long time. -- Chris Kavan

"Storks" isn't without heart, but this loud and looney animated feature isn't likely to touch anyone outside the kiddie demographic.

STORKS is a bright and zany animated film that families will enjoy. Its wordplay and cartoon violence may remind some of Looney Tunes or similar animation. It does wind up a little bit slight by the end.

'Storks' is the second animated feature from the newly reformed 'Warner Animation Group', who gave us the surprise hit 'The Lego Movie'. 'Storks' continues that same brand of top-notch animation, voice-work, and hilarious comedy. I didn't know a single thing about this film before I saw it, and I think that complete lack of any expectations propelled my overall enjoyment. What a pleasant surprise! 'Storks's style of animated comedy harkens back to the Chuck Jones era of Looney Tunes. Rapid fire jokes of clever irreverent nature meld into one cohesive package of hilarity! I laughed almost nonstop through this whole movie! The superb voice-acting and wacky physical animation style compliment each other so perfectly. It feels as if every tiny (seemingly throwaway) gag was given as …

Movies i have seen this fall by Chrisman 27

No posts have been made on this movie yet. Be the first to start talking about Storks!