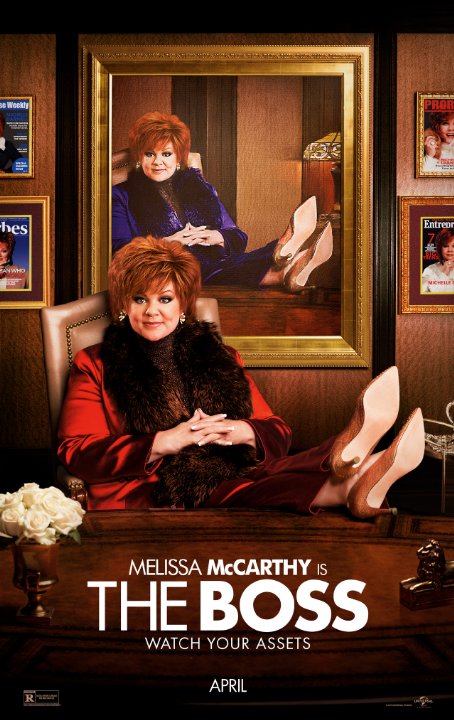 Plot: An industry titan finds herself with a prison sentence after getting caught for insider trading. After serving her time, she re-enters society looking to reclaim her title as America's sweetheart only to find not everyone is so willing to forgive and forget. -- Chris Kavan

If McCarthy's main characters hadn't been so unlikable maybe this could have worked. Plus, the film veers wildly between heartfelt family to foul-mouthed hard R to mean-spiritedness that you can't put a bead on just what the film is trying to accomplish. A great supporting cast also can't save this one.

Well as bad as Ghostbusters was, it is the better Melissa McCarthy movie released in 2016. I guess that's something. The Boss does feature the better performance out of McCarthy strangely enough. Her role as disgraced and devious businesswoman Michelle Darnell is already a funny character but on paper, I'm sure she sounds hilarious. McCarthy ends up the best thing about the movie which makes it more disappointing that it's not that funny.
I did chuckle a few times but it's too scattershot for its own good. Is it a satire on big business? Is it meant to be a family movie despite the R rated language and humor? Is it supposed to be heartwarming or mean-spirited? Hard to tell. The cast includes a lot of funny people like Kristen Bell, Kathy Bates, Kristen Schaal, and Peter Dinklage as the …

'The Boss' brings us round two of the writing/directing duo of comedy star McCarthy and her husband Falcone. Their last unfunny blunder, 'Tammy', was a hard one to sit through, and their followup is no different. It felt like I was watching a sequel to that awful turd, because the two films are so similar in tone, execution, storytelling, and (terrible) humor. I will give one positive before I continue ranting. The dramatic moments later on involving the main character learning from her mistakes do have a sweet nature to them, thanks in part to McCarthy's abilities. That's it. The rest of this movie was a never-ending bore of super-lame jokes and bad direction/editing. Every gag has already been done (in some form) hundreds of times in other films. Every crude line of dialogue …

No posts have been made on this movie yet. Be the first to start talking about The Boss!