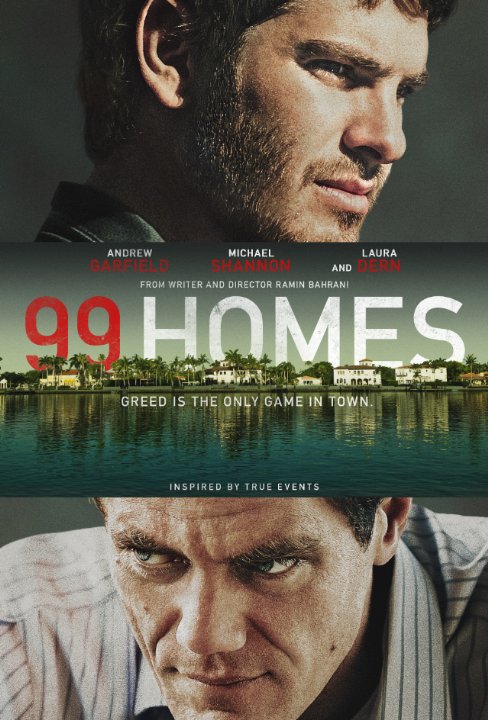 Plot: A hard-working, honest construction worker finds himself evicted by a charismatic yet seemingly heartless real estate broker. Moving into a seedy motel with his mother and 9-year-old son, he finds an unexpected chance at getting his home back - by striking a deal with the devil: working for the very broker who took his house. -- Chris Kavan

"99 Homes" is that rare type of drama that's hard hitting because of how relevant it is. It depicts something affecting the lives of families all across the country which makes it so topical and ant the two incredible lead performances make it so intense.

Topical drama centering on the recent housing crisis. The story is worth investing in, not just for the superb performances all-around, but also in the film's serious stance it takes on the issue. There's enough insight into the struggle from both sides to warrant this as informative as the similarly recent, 'The Big Short'. The big difference here is the ground perspective of the common man victim in the situation. Through Garfield's character, we see the devastation of loss at the beginning and his corruption at the hands of the film's capitalist villain. He becomes transformed into the very thing that brought down his life and, in turn, does the same unto others. It's a crushing experience that resonates even during a (very slight) formulaic climax. But his final fate sticks to …

No posts have been made on this movie yet. Be the first to start talking about 99 Homes!