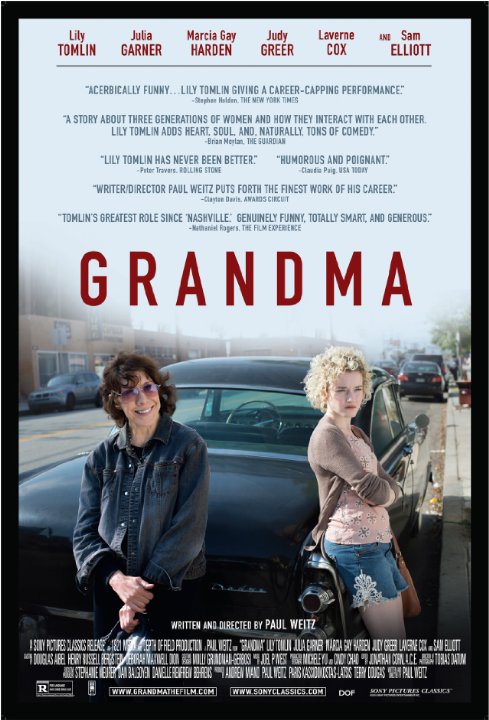 Plot: An acerbic woman, Elle Reid, finds her protective bubble burst when her 18-year-old granddaughter, Sage, suddenly shows up needing help. The two find themselves on a day-long journey where Elle will find herself facing her past while Sage confronts the reality of her future. -- Chris Kavan

"Grandma" is a sincere little comedy that proves you are never too old to come of age.

'Grandma' is an enjoyable gem of a small movie. A simple plot, and brisk pace, easily guide us through some rough emotional territory while sharing a good amount of charming laughs and crass dialogue. The film is a study of it's title character. The grandma in question is not your typical elder. She's an artist, a rebel soul, and a free-thinker who will immediately relate her thoughts of you (good or terrible). She's a great friend and mentor, until her personal detachments get in the way. Likewise, her parenting skills manage to balance between administering 'tough love' and protective embraces. As the film progresses over the events of a single day, we see her visit people from her past that she has scorned. I especially loved the differing relationships between the three …

No posts have been made on this movie yet. Be the first to start talking about Grandma!