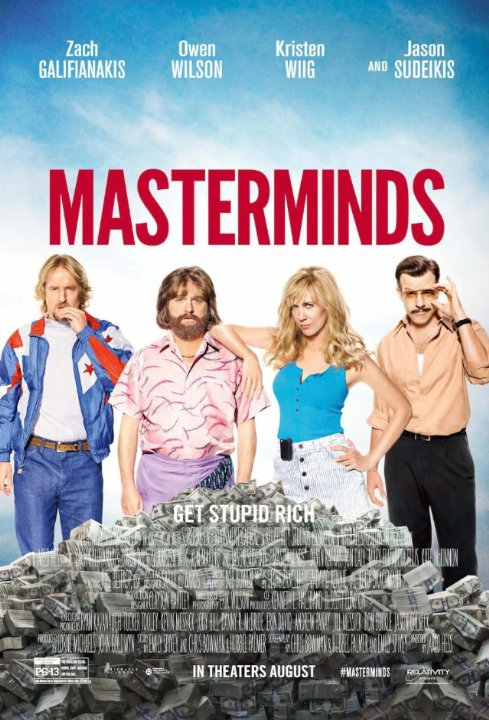 Plot: A mundane armored car driver leading a mundane life finds himself in over his head when a flirtatious co-worker lures him into an outrageous heist plan that, against all odds, he actually pulls off. But when he hands over the $17 million in cash to these duplicitous morons, he finds himself set up to take the fall. Based on true events. -- Chris Kavan

A mediocre caper with a decent cast doing their best. The admittedly remarkable true story angle is interesting but then the movie can't seem to make up its mind as to what type of story it's telling. Is it a slapstick farce or a dark comedy? Much of the movie is played for broad laughs but some elements (namely Jason Sudeikis) are from a totally different film. But one that seems far better since Sudeikis is the best part of the movie as this sadistic assassin. Some do alright like Owen Wilson and Leslie Jones. Zach Galifianakis and Kristen Wiig slum it though while Kate McKinnon continues to baffle me as an actress.

'Masterminds' is a comedy dud. It's solid comedy cast and funny sounding premise (based on actual events?!) somehow miss the mark entirely. Director Jared Hess, of Napoleon Dynamite, brings his slow-paced awkward vibe to this material. The obvious first mistake here is that his comedic sensibilities are juxtaposed with that of obvious studio produced, commercially viable material. Many scenes feel out of place with one another in terms of tone. Each of the actors are given many moments to shine, but the humor they are given continuously falls flat. All of this combines to form a sluggish pace, which makes this hour and a half film feel much longer. Sudeikis is the only player to somehow transcend the lower grade demeanor of the comedy and managed some chuckles out of me. I did …

No posts have been made on this movie yet. Be the first to start talking about Masterminds!