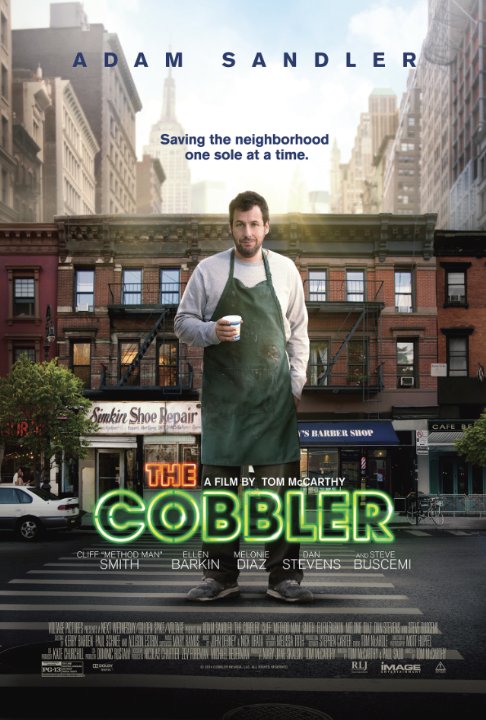 Plot: Max Simkin repairs shoes in a New York shop that has been in his family for generations. But Max is getting fed up with the daily grind and is about to give up until he stumbles upon a family heirloom - one that literally allows him to "walk in another man's shoes" and gives him a new outlook on life by seeing through the eyes of his customers. -- Chris Kavan

While its message of taking a walk in someone else's shoes is touching, the movie fails to strike any comedic notes.

I have no idea how Thomas McCarthy did it, but it's quite unbelievable. One minute he's an Oscar front runner, and then all of a sudden, a favorite at the Golden Raspberry Awards in one year. I'm not sure if I should be giving McCarthy round of applause for doing the impossible or ask McCarthy what he was thinking. Maybe both.

"He had no idea who I was.
I could be anybody I want.
This is great.â

Frankly, I'm not such a big Adam Sandler fan. I think he isn't that funny. I can't really pinpoint what bothers me, but his nonchalance and apathy starts to get on my nerves after a while. I can't remember me smiling even once while watching "Blended" or "Click". It always seems like he's shaking funny dialogues out of his sleeves and occasionally swings a joke in between with such an air and expression on his face as if he suddenly comes to the realization that it's time to say something funny (even though his humor is mostly limited to farting). His films always have a final conclusion including a valuable life lesson. No, Sandler is not my favorite comedian. But here in "The Cobbler" he wasn't that bad. I …

No posts have been made on this movie yet. Be the first to start talking about The Cobbler!