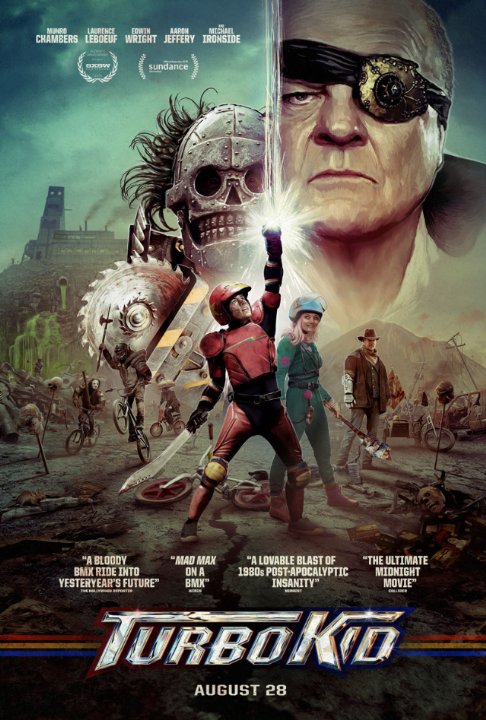 Plot: A post-apocalyptic and violent future - in this dangerous wasteland, The Kid, a young scavenger obsessed with comic books, must become a reluctant hero when he meets the mysterious girl, Apple. Both find themselves the target of the sadistic Zeus, self-proclaimed leader of the wasteland, but a chance find of an ancient, turbocharged weapon gives The Kid an edge - and a chance to cleanse the wasteland of evil and save the girls of his dreams. -- Chris Kavan

The best kind of independent movie is one made with equal parts love for the subject and talent. Turbo Kid is a throwback to the 80s apocalyptic genre. It reminds me a bit of Mad Max, a bit of a Troma B-movie (especially the over-the-top blood gags) and a bit of every "young person in a grand adventure". The cast is mostly unknown (save for Michael Ironside) but it is good - Munro Chambers plays "The Kid" with equal parts naivete and bravado while Laurence Leboeuf is overwhelmingly energetic as Apple (and love her eyes!). Make no mistake, there is a lot of violence, the film is kind of cheesy but it's loads of fun. More please!

If this supposed to remind me of 90s show I used to watch when I was a kid, well, it just didn't. If the intention of the film is to look at this material in a much higher degree of maturity, I have very little appreciation for it. I don't even want to talk about what is real in this film, because I don't think that it even attempted to be one. All I know, for sure, is that there are creative and clever people behind this production who were trying to send a deep message. However, my overall reception is that everything looked and sounded fake that it's hard for me to actually decipher which characters should be the weird one and the non-humans. Most of the scenes are obviously not to be taken seriously, but what I couldn't stand is the predictable yet unbelievable (the IRONY) turn of …

No posts have been made on this movie yet. Be the first to start talking about Turbo Kid!