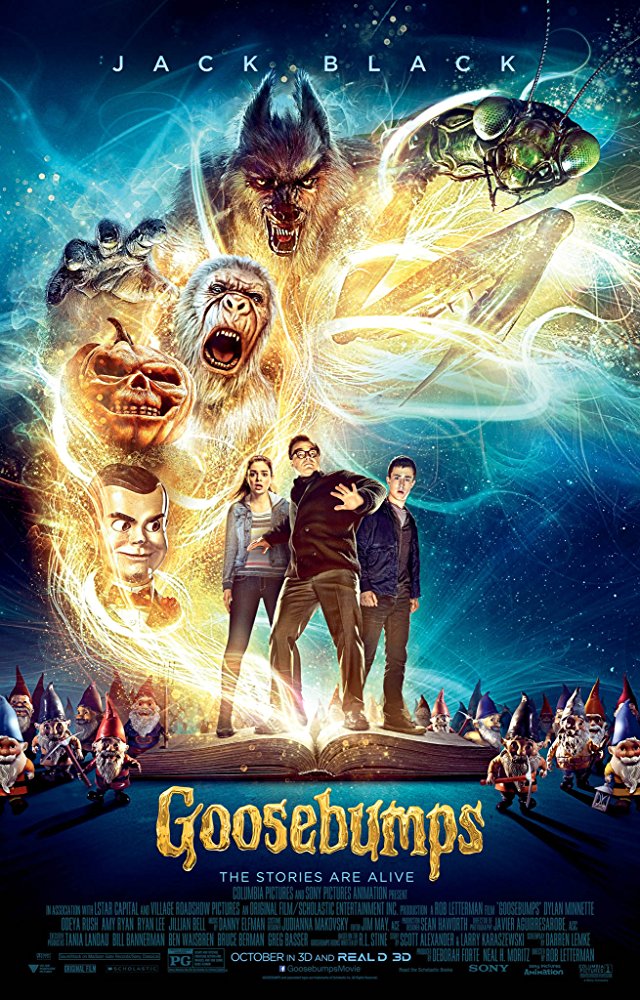 Plot: R.L. Stine has spent years writing some of the most memorable horror for the younger crowd. But when the town of Greendale, Maryland finds itself under attack from the fictional creatures come to life, Stine's niece will team up with a local kid to combat the monsters set free. -- Chris Kavan

I was never a Goosebumps fan. Never read the books, but I did watch a couple episodes of the TV show. So based on that knowledge, this movie wasn't anything spectacular or noteworthy, but I find it enjoyable. It fits very well with the festive season of Halloween.

The premise for the film's adaptation is a smart idea, but it's attempt at blending comedy into the mix sometimes feels awkward or over the top silly.

Is there such a thing as a family horror film? I don't know, but Goosebumps comes closest to that genre. It has its moments, but mostly it's kind of fun with more slapstick monster trouble than genuine terror. Still, talking dummies and murderous lawn gnomes, a creeping plant, ice-ray wielding aliens and a real teen wolf - it's all in good fun, but more for the younger crowd, I think.

"It's like stop trying to be Stephen King, man. Let me tell you something about Steve King. Steve King wishes he could write like me, and I've sold way more books than him, but nobody ever talks about that!"

Lets organize a pleasant afternoon and watch a soft horror movie with the whole family. Why wouldn't we use the oeuvre of R.L. Stine? This writer wrote a whole series of books known as the famous Goosebumps. And to circumvent the obstacle of choosing a book, they just used all of them in the same film. What you get to see is a horde of horror figures, planning to destroy the human world. From small, annoying gnomes to a giant grasshopper. There are some less successful creations and there are also some highly amusing creations like Slappy, the Yeti and the werewolf with basketball …

No posts have been made on this movie yet. Be the first to start talking about Goosebumps!