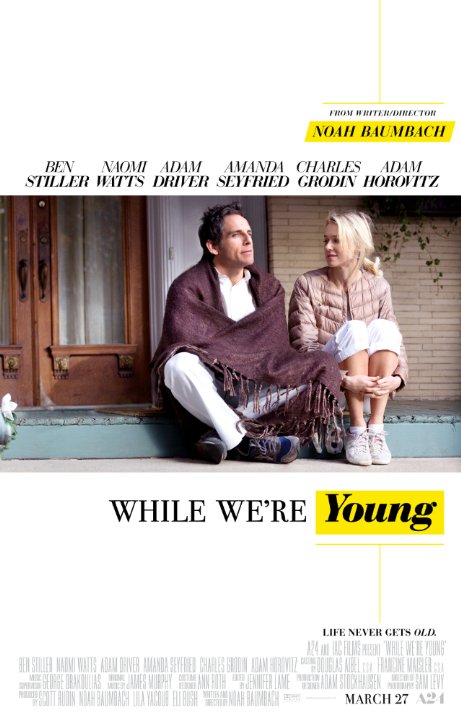 Plot: A middle-age couple find both their marriage and careers in disarray following the arrival of a young couple who enter their lives. -- Chris Kavan

Enjoyable for the most part, but "While We're Young" isn't something I would recommend for simplistic viewers.

This movie just reignited my deep hatred for hipsters.

Noah Baumbach's latest film explores the dynamic between an old couple and a young couple, both of which have similar passions and aspirations. The old couple admires the young couple in many ways and vice versa, and in those regards "While We're Young" mostly succeeds. It's smartly executed by Baumbach, and he employs some very wonderful actors who succeed in bringing both laughs and heart to the table. It's mostly well written, however I found some aspects to be rather forced and a lot of it to be painfully slow-moving. "While We're Young" is a fairly entertaining film that will undeniably speak to some audiences; it just didn't really speak to me.

Youth is the root of all evil!

I enjoyed this far more than the 2.5/3 star rating would imply. It's good but While We're Young is weighed down by two things that bothered me and strangely they bookend the movie. In the trailers, remember how this was supposed to be a comedy? It isn't. It's far and beyond a drama but it's got some genuinely funny and sometimes strange stuff going on. The second part is near the end and it involves Ben Stiller's arc. The conclusion while a happy ending (I dunno if that's a spoiler) does not satisfy me at all. He experiences a heartbreaking revelation halfway through the movie and I never felt like it was a happy ending on his part. The other cast does fine. Adam Driver continues his hot streak as one of Hollywood's best rising talents and Naomi Watts does great next to Stiller as his …

'While We're Young' injects some realism into the old 'middle-age couple in a rut' formula. Unlike many in this sub-genre, the characters have a genuine quality to them. Their dialogue and personal dilemmas flow naturally. I think most people of any adult age will find something relatable within the film because of this. The funny moments are more reflective and observant than outright 'laughable'. They capture all the awkwardness and vulnerability of specific situations. They also examine social habits between various groups. This is most prevalent when their activities with the younger couple are visually apposed to that of their friends of the same age. I like these scenes best. It's all easy-going until one character has a minor revelation that sets the plot on a certain …

No posts have been made on this movie yet. Be the first to start talking about While We're Young!