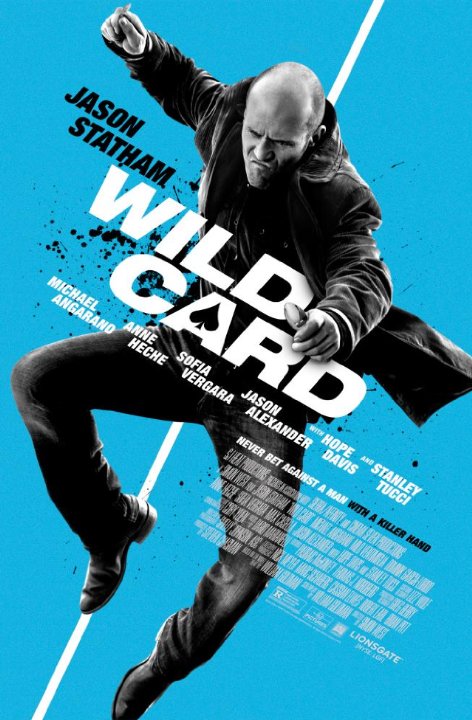 Plot: Nick Wild works as a Las Vegas bodyguard and puts his professional skills to the test while struggling with a personal gambling problem on the side. When one of his friends is assaulted, he wastes no time tracking down the culprit and striking back - too bad his target turns out to be the son of a local mob boss. With both the law and the mob on his trail, Wild has not choice but to go all in - and hope he comes out on top. -- Chris Kavan

Wild Card is a very bland and forgettable movie with a few nice shots. Jason Statham has given solid performances in previous movies and in this one I thought he was alright, I mean he wasn't great, but not bad. It's an easily forgettable movie that wasn't anything that special when it first came out and it's nothing special now.

Statham is simply Statham as we know him

"Well, I've been knocked down, blown up, lied to, sh*t on, and shot at. So nothing surprises me much anymore, except the things that people do to each other.I'm a licensed pilot, took karate in Tokyo.I lectured on economics at Yale.I can memorize the front pages of the New York Times in five minutes and repeat it back to you in five weeks.I was the National Golden Gloves champion three years in a row. I'm fluent in four languages and can wrestle with a menu in five more. Jesus! Don't interrupt me. There's more. More ? Yeah. I lie a lot. "

A film with Statham always guarantees a few solid brawls that usually end up pretty painful for his opponents. In the meantime he's commenting on everything with his juicy dialect. After testing his dramatic skills in the engaging film "Hummingbird" …

The words "Leading Man Jason Statham" is pretty much synonymous with "I will find a way to punch and/or kick myself out of this problem". From The Transporter to Crank to The Expendables - Statham is a an action star through and through. But it also leads to repetition and falling into a rut. The closest he's come to elevating himself was with Hummingbird - a role that gave him a bit depth beyond shooting and fighting. Wild Card, directed by Simon West (who worked with Statham previously in the remake of The Mechanic) is a remake of the forgettable 1986 Burt Reynolds vehicle, Heat.

Statham plays a Las Vegas bodyguard with a serious gambling problem. When a female friend (Dominik GarcÃ­a-Lorido) winds up broken and beaten, she turns to him to help get revenge on the petty criminal …

Jason statham plays a bodyguard/gamberling addict in las vega, after a friend of his is attacked by some vegas mobsters he helps her in getting revenge but the mobsters then come after him. meanwhile he is hired but a nerdy guy who wants him to be some kind of mentor.
As a staham fan i hate to say it but this is probaby his weakest film to date. its a little different to his usual films its all just very weird and kind of arty direction wise. the nerdy character who hires him is all just to weird and makes little sence especialy the ending as you never once feel they even got to know eachother.
the girl who gets beaten up who he helps was good but she comes and goes all to soon staham actually doesn't do much or seems to want to help her which is all a little to odd.
after he helps …

No posts have been made on this movie yet. Be the first to start talking about Wild Card!