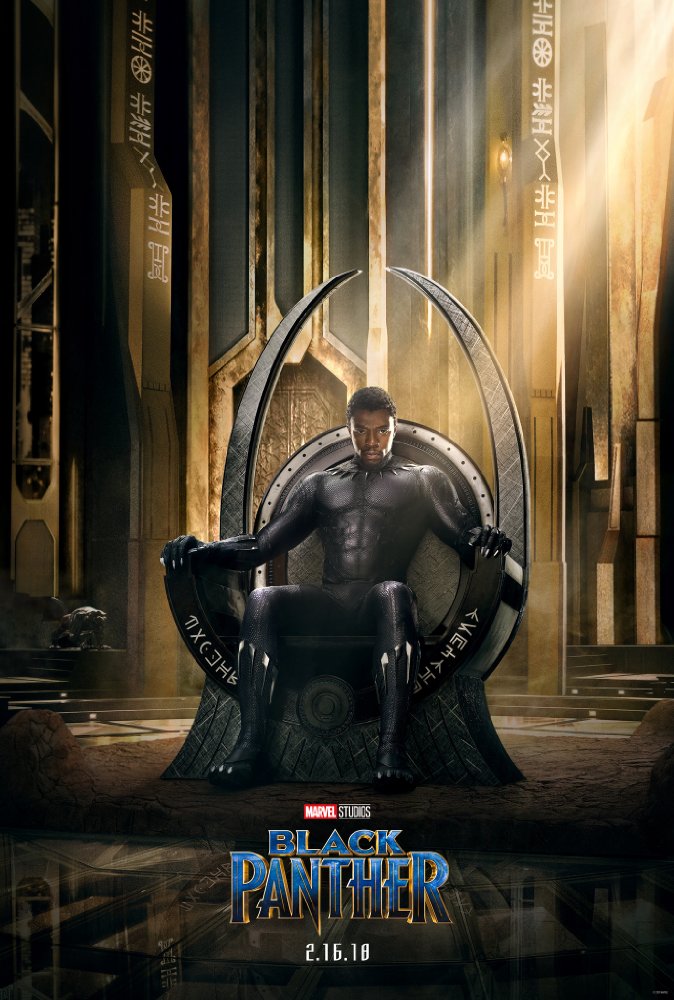 Plot: Following the death of his father, T'Challa returns home to the advanced nation of Wakanda in order to take the throne and rule his land. But he soon finds that forces from both outside and within his country conspire to bring ruin and drag Wakanda in to a new world war. But with the power of the Black Panther, along with help from CIA agent Everett K. Ross and the Dora Milaje - Wakanda's special forces, T'Challa will stop at nothing from saving his homeland - and his father's legacy. -- Chris Kavan

One of the best MCU offerings in some time, "Black Panther" is a thematically rich superhero epic that's impossible to see and not feel its size, immensity, and importance.

Black Panther, directed by Ryan Coogler, is one of the better MCU efforts. It's dramatically and thematically rich, fueled with an amazing screenplay, beautiful cinematography, polished direction and wonderful performances across the board -- especially Michael B. Jordan, whose Killmonger is arguably one of the best, most menacing and badass villains in an MCU film to date. The final confrontation between T'Challa and Killmonger is arguably slightly underwhelming, as is the battle that surrounds it -- it feels very MCU, very run-of-the-mill. But still, this is an incredible film with a whole lot to love.

The newly crowned king of a highly technologically advanced but secretive African country inherits the mantle of âThe Black Pantherâ but discovers a secret that threatens not only his rule, but the entire world.

The hype surrounding the latest Marvel Studios venture was inescapable which makes objective criticism rather difficult. It is extremely successful in creating a believable world with its own technology and culture and the set design, costumes, production design and even the accents sported by the uniformly excellent cast make the proud, unconquered state of Wakanda feel like a real and unique place. Itâs also easy to see why it would resonate with black communities everywhere to have an African state that stands shoulder to shoulder with the worldâs superpowers and …

I Didn't Expect This From Marvel

I had no plans of watching this Marvel movie until it gets a nomination at the Golden Globes. I must say that it was not as brilliant as everyone would say it was, and when I say "everyone" I meant the Marvel fans. I am not a Marvel, of all its movies, only Thor got my interest. But I should say that this film actually makes sense. Its fictional world is not far from the reality that actually needed attentions. I like how it deviates (to some extent) from the usual action-fantasy films by the Marvel studios. It introduced characters that could stand individually. I even liked the villain (Michael B. Jordan's character) which is something that I like in movies, villains have reasonable explanation of why they do what they do. Cinematic speaking, there are rooms for improvement. I liked …

So this is kinda late since the hype for Marvel's latest entry is slowly dying down, until 'Infinity War' hits and everything else will be history. Black Panther is a good movie, but sadly not a great one. There's a lot of great things about it and boy was it a joy to watch. The problems on the other hand aren't something to overlook.

Ryan Coogler is an excellent director with his previous work on 'Fruitvale Station' and Creed''. While I think he stumbled a bit with this movie since it's a much bigger movie and the studios breathing down his neck, but at least he brought a brand new superhero in style.

Chadwick Boseman is a great actor and the portrayal of TâChalla/Black Panther was pretty good. I do think he got overshadowed by everyone else, mostly from the …

Me also excited for this.Trailer is really awesome.

I liked the trailer, plus it's nice to see Danai Gurira in something other than The Walking Dead. Marvel has taken plenty of chances (Guardians of the Galaxy, Doctor Strange) in introducing new characters to the fold, but if the past is any indication, this will be another home run.

Great trailer, not going to lie. This film cannot disappoint, I know you can say that for any Marvel trailer, but this is a Marvel film with a black protagonist, so this is a major step forward for Marvel, now that poster, it's not as bad as that overcrowded Homecoming poster, but, still pretty bad in terms of the photoshop