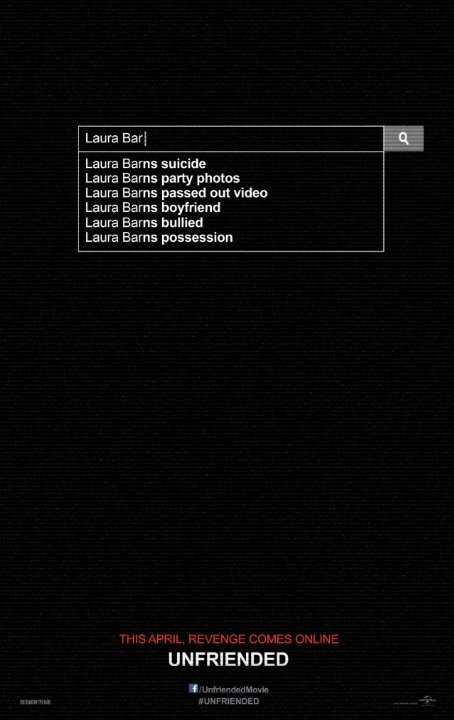 Plot: Six friends video chatting get Skype invite from a classmate - the problem is, she killed herself exactly one year prior. Writing it off as a joke, the six suddenly find their deepest secrete exposed and realize this is no joke - and their lives are on the line. -- Chris Kavan

The Perils of Cyberbullying

The real horror of Unfriended (or, as I like to call it, the film formally known as Cybernatural) is not so much in the various deaths suffered by the generic white teenagers in the film, but rather the reasoning behind these deaths. The rise of social media has given us instant access to funny cat videos, surprising YouTube stars and instant communication but has also given rise to less savory elements like sexting and, of course, cyber-bullying.

Unfriended opens on the suicide of a teen, Laura Barnes, one driven to take her life after an embarrassing video surfaces and many of her "friends" encourage her to commit suicide (which she does). By all accounts she wasn't the most well-liked of people at her school (based on anecdotes picked up in the film) but neither was she deserving …

Comedy of the year

Unfriended is so far the best comedy of the year, I mean how can anyone watch this movie and take it seriously. It's just a bunch of stupid white teenage's that are to stupid to leave they Skype chat when some one is trying to hack them, you know turn off your computer or quickly report them, that's what most people do.

The character's in the movie are all the cliche stereotypes that it's really hard to care for them when I couldn't care less if they made it out life or not. Oh and another thing they deaths in the movie are too funny to put into words, I mean how can anyone find a fat kid getting attack by some unknown spirit, puts he's own he's own hand in a blender while he makes a funny noise and then he puts he's own chin in as well. Oh my freaking god I laughed my ass off when …

No posts have been made on this movie yet. Be the first to start talking about Unfriended!