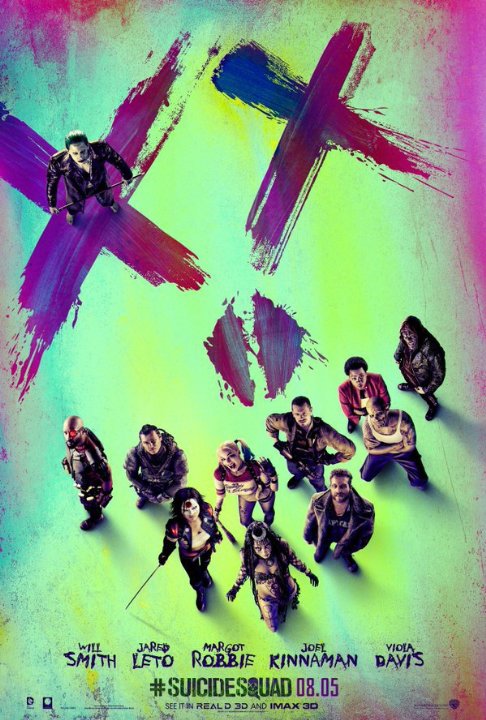 Plot: You know them as the most devious and dangerous super villains of our time: Deadshot, Killer Croc, El Diablo, Enchantress, Slipknot, Harley Quinn, Captain Boomerang and The Joker... but the government knows them as The Suicide Squad - recruiting the baddest people on the planet for black ops missions in return for clemency. But how can you control those who have no control of their own? -- Chris Kavan

Very disappointing. This movie is such a missed opportunity. It could have been such a fun, violent, over the top action movie, but instead we got a somewhat boring and forgettable cliche fest.

MASSIVE Disappointment The trailers of Suicide Squad made it look like we were in for a hilarious and exciting film. But sadly, Thatâs not what happened here because despite a kickass soundtrack and great performances from Smith, Robbie, Davis, Kinnerman and Courtney, Suicide Squad is a huge mess with a terribly written script, Choppy editing, Bad CGI, Mediocre performances from Leto and Delevingne, The Joker is in it for like only 5 minutes, and the main villain is poorly written. Suicide Squad should not have been a bad movie, Itâs nowhere near as bad as letâs say Fant4stic or Batman And Robin, But Suicide Squad is a massive letdown that left me very disappointed. Rating: Rotten

A movie I'd been looking forward to for a while, "Sucide Squad" inevitably let me down with a convoluted and overpacked storyline with messy execution, little character development, and a disappointing lack of fun.

A motley gang of sociopaths and criminals are recruited by the government as a response team to answer the new threat posed by superhuman powers.

The Dirty Dozen gets the superhero treatment in this rather desperate attempt to cling to the MCU's coat tails. While Marvel have pretty much perfected their winning formula DC is very much still trying to find its feet, their films feeling very much like a series of cheap knock-offs rather than a successful franchise in its own right. The only character with any real meat to them is the ever-likeable Will Smith's Deadshot and his ham-fisted attempts at redemption, but the rest of the roster is little more than a collection of colourful cardboard cut-outs. We have Colonel Flag (AKA "crap Captain America"), Killer Croc (AKA "crap Hulk"), …

"We are all ugly inside."

I heard that the production team decided to reshoot some sequences after the hype of the trailer, obviously, this film suffered in multiple levels trying to appeal to its audience. I didn't expect this to be realistic, but I was hoping that I would at least see a decent story. No focus, im not really sure who the protagonist was/were, I dont even get what the filmmaker want to say with this. The editing/post production wasn't as brilliant as any other DC, Warner Bros movies. I spotted a lot of glitches with continuity. However, I would say it is still A BIT entertaining. With all the bad things this film holds, Margot Robbie stood out. Plus, I like the bad guys' jackets. I just really wish Viola Davis isn't part of this film, same goes to Smith and Kinnaman.

While disappointing, still a good experience

If anything, the marketing team for âSuicide Squadâ did their job well. Following the critical backlash against âBatman v Superman: Dawn of Justice,â the second trailer for David Ayerâs supervillain team-up showcased a more light-hearted tone than that of last springâs Comic Con teaser, and all of the following trailers and TV spots were edited to near perfection. The hype was real. The stakes were high. But how did it measure up?

The characters and the talent behind them are the driving force behind âSuicide Squad.â DC could not have made a better casting decision than Will Smith as Deadshot, and Margot Robbie was nowhere to be found in this movie: there was only Harley Quinn. And where there is Harley Quinn, there will always be the Joker.

All of the filmâs …

I thought it was okay, But compared to the terrific trailers, This was disappointing

I'm torn about how this one is going to turn out, but the overall cast is interesting to say the least and David Ayer has been solid (especially liked Fury) and I'm interested to see just how dark they let him go (I'm actually hoping for an R, but PG-13 always tracks so much better when it comes to superhero movies). It kind of feels like they are crafting an anti-Avengers team - but whether that's a good or bad thing, who knows. It will be interesting to see how this fits in with DC's whole &hellip;

This movie has a lot of potential- starts with the director himself, David Ayer is one of the most underrated director. The cast is well, overwhelming, such as the talented Jared Leto as The Joker, the sexy Margot Robbie, and so on. I think most of people, always thinks as the cast, but i think David Ayer truly give the best to keep the characters alive- news flash, he read the comics. I think the only thing i am doubting, is Cara Delevigne, and her characther. i know, she's talented, people &hellip;

Oh this another must watch movie for me next year. Joins the list including the new Ghosbusters film