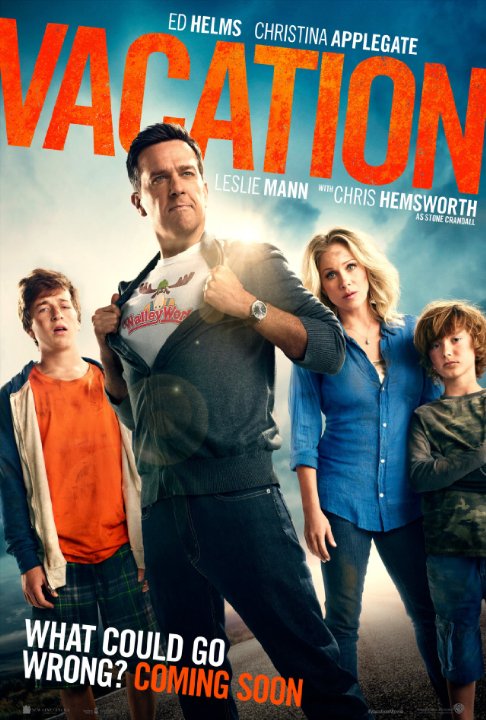 Plot: A now-grown Rusty Griswold, hoping to capture some of that magic of his youth (and re-connect with his wife and two sons), plans a cross-country trip to the world's greatest theme park: Wally World. A good plan - but they'll have to survive the trip first. -- Chris Kavan

Hard to believe this tasteless comedy could be related to the Chevy Chase classics.

Just can't capture the spirit of the original films, even though if does try hard. It tries to push the envelope a bit too much into the raunchy category (so popular these days) and it misses more than it hits. Some of the cameos are pretty hilarious and when the jokes hit, they are pretty good it's just that not enough of them land.

I read alot of bad reviews for Vacation so I wasn't expecting to like it at all.It was a funny movie until the scene where Rusty is driving & starts flirting with the lady driving the sports car next to him.She veers onto oncoming traffic & gets smashed by a truck.Rusty looks in his rear view mirror & you see a big ball of smoke.Could somebody explain to me how this is funny?! After that I couldn't watch anymore.I remember when Vacation 1st came out, a couple of the trailers looked pretty funny.I couldn't wait to see the movie & then after I saw the trailer with the car crash in it I no longer had any interest in seeing it.I completely forgot about that until I started watching the movie.Before the car crash scene, Vacation was a funny movie except for the sorority party scene.I thought …

Vacation (2015) R Rusty (Ed Helms) decides to follow in his fatherâs footsteps and take his family on a long distance trip to Walley World. If you are nostalgic for the old Vacation series, you might enjoy this film. I found the film funny, at times, but itâs just too long and too predictable. I liked Ed Helms as Rusty, and he has good chemistry with Christina Applegate, who isnât given enough to do in this film. The kids (Skyler Gisondo, Steele Stebbins) are both funny and have some enjoyable scenes together. Chris Hemsworth is hilarious as the Texas weatherman married to Rustyâs sister, Audrey (Leslie Mann). There is a scene with Hemsworth that had me on the floor laughing, but the rest of the film doesnât quite live up to that scene. I just wish there had been more …

Not Your Dad's 'Vacation'

The new 'Vacation' (rebooted sequel?) doesn't feel like the previous 'Vacation' films. It's not consistent in tone with the series. This is a straight up R-rated ridiculous gross-out comedy. It resembles something like 'We're the Millers'. A typical family road trip premise becomes an excuse to string together a series of vignettes, which include: bodily fluids and excrement, heavy sexual dialogue, cursing children, harsh violence, and some off-putting remarks towards pedophilia and rape. And yet, I still managed to get some shock value type laughs out of that concoction. That's the main positive saving this all-too-wornout formula from being any less than average. It's not mean, or cynical. The family, despite having little character, work well as a unit. I found myself …

No posts have been made on this movie yet. Be the first to start talking about Vacation!