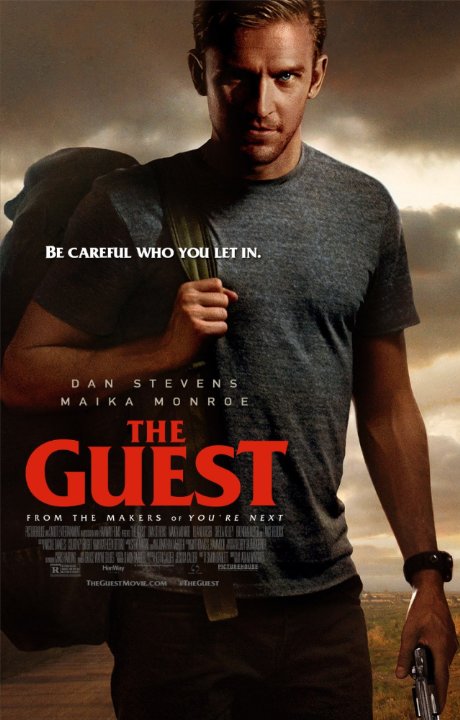 Plot: A soldier comes the Peterson family, claiming to be a friend of their son who died in action. But as a series of accidental deaths occurs, the welcomed man soon turns into a suspect. -- Chris Kavan

Dan Stevens commands the screen as a sinister combat veteran that comes to stay at a grieving family's home. The third act gets very silly but the movie remains suspenseful enough.

I have to admit, The Guest surprised me. Of course, I should have expected more of a horror angle with Adam Winegard directing. He has delivered on the surprisingly good You're Next as well as segments of the horror anthology films V/H/S, the ABCs of Death and V/H/S 2. While The Guest starts off as a standard "overly-nice guy enters families life" it soon becomes a rather tense thriller. It's clear early on that "David" has issues - but things really ramp up at the end leading to a surprisingly high body count. The film doesn't skimp on the blood (or build-up) and is quite effective. Wingard proves once again he is a fine craftsman at horror - and even throws in some great references to both Halloween and his previous films.

'The Guest' is director Wingard's follow-up to the surprisingly fun 'You're Next'. I enjoyed that film for it's simplicity, genre twisting, and willingness to entertain. And I enjoyed this one for all the same reasons. This domestic disturbance story unfolds naturally through it's fast pace and quick character summarizations. No time is wasted, and explanations are kept to a basic minimum. It's not trying to be anything more than an easy entertaining watch. It succeeds at it's purpose.

The Guest is freaking amazing.

Adam Wingard the director of this movie Previously did: You're Next and the short films from V/H/S 1&2, but now he direct's his new film The Guest and this is one of his best.

The story is about a soldier comes the Peterson family, claiming to be a friend of their son who died in action. But as a series of accidental deaths occurs, the welcomed man soon turns into a suspect.

Before seeing this movie I known nothing about it. I haven't heard anyone talking about it so I pretty much went in with a open mind knowing nothing, and after viewing I can say that The Guest is freaking amazing and brilliantly flawless with one of the best soundtracks I heard since the 2011 movie Drive.

Dan Stevens did a outstanding performance as the nice guy that has a dark and uneasy side to him, …

No posts have been made on this movie yet. Be the first to start talking about The Guest!