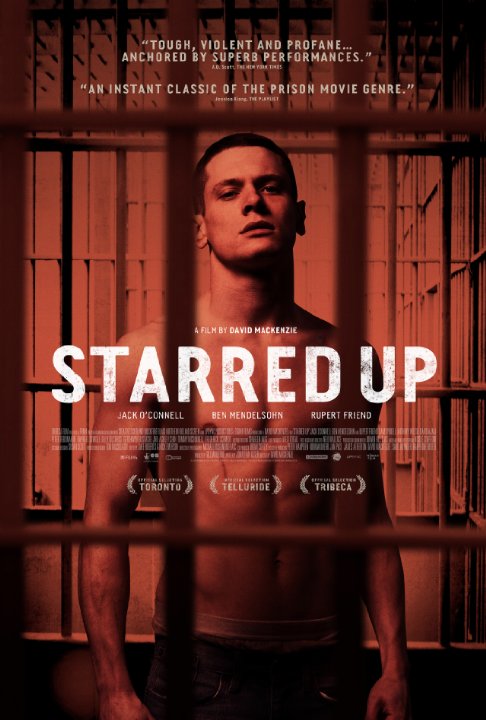 The darkest and most gripping father and son story I've ever seen, and it's made all the better by superb performances from up-and-coming actor Jack O'Connell as the rampant youth and Ben Mendelsohn as the rough parental figure wanting to protect him.

Starred Up is a good look of how brutal prison is

Prison is tough but Starred Up shows us how tough and brutal prison really is and why you shouldn't go there, I mean why would you?

The story is about a troubled and explosively violent teenager is transferred to adult prison where he finally meets his match - a man who also happens to be his father.

I sawed Starred Up about two months ago now and more I think about it and analyzed the movie deep into it's bone to get my thoughts together. Because I didn't know what to think of it at the first time watch. There was no good or bad came to my head first time seeing it so this is why pretty much I waited months to think through, because I not going to review this film and not know what to say. But now I can safely and happily say that this movie is a shot by shot real like look at …

A tough gritty movie of prision life. after being transfered to a adult prison the lead character rebels against both the system and the inmates who run the prison from the inside.
Thw twist to the story is oneof the main men inside happens to be his estranged father who he wants nothing to do with. This movie is real gritty violent and well acted. while it starts of with a few doubts it becomes easy to get into the character and forges its only path as a prison drama.
The end sequence of events is very good and violent. the final ending is very nice but leaves you with questions you would of liked answered but i guess sometimes its best not to know and leave the audience guessing.
overall its a enjoyable solid movie, if you like gritty films with realisim aspects like ( scum ) and …

No posts have been made on this movie yet. Be the first to start talking about Starred Up!