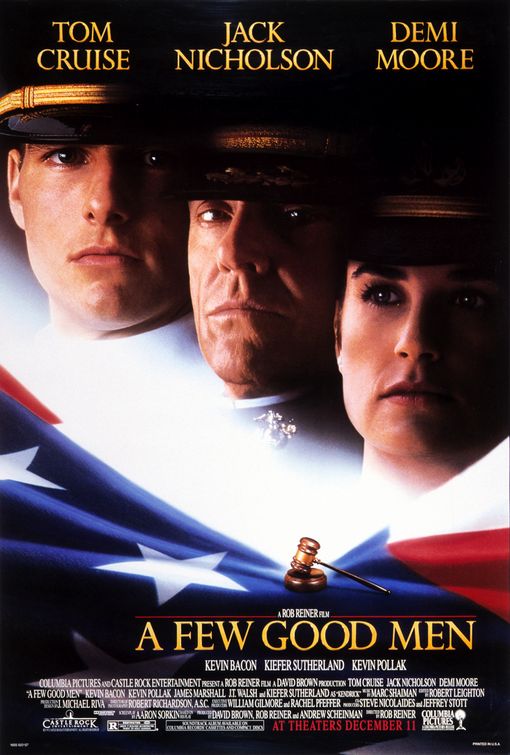 Plot: A marine lawer defends fellow marines against a muder they claim they did not commit.

This is, without a doubt, my favorite courtroom drama and my favorite Tom Cruise film! Everything is great about this film: The acting, the script, the music, etc. The courtroom scene between Cruise and Nicholson is so epic! I practically have that scene memorized! The "Galactically Stupid" scene is pretty awesome too! I love Rob Reiner. He is a great director, and this is his best, in my opinion. I would have given the Best Picture Oscar to this film in 1992. Without a doubt, it's in my top 20!

I sincerely struggle to think of ONE good film with Demi Moore in it. Over-rated courtroom tosh with THAT line in it. Which isn't a very good line anyway...

An intense military drama that, unfortunately, portrays a seedier view of the military behind the scenes. All of the cast are strong, including Cruise in an unusually nuanced dramatic role and Jack Nicholson as a sarcastic and villainous officer.

Rob Reiner directs an All-Star cast in this fantastic courtroom drama which has you enthralled throughout until its climatic conclusion. Tom Cruise, in one of his most inspiring roles; stars as Lt. Daniel Caffee, a Naval attorney who is asked to defend two Marines accused of killing a third at Guatanimo Bay, Cuba. He soon finds out that he was given the case so it would never go to court and he reluctantly fights for the marines innocence at the risk of both their lives and his career. Demi Moore, Kevin Bacon, Keifer Sutherland and Kevin Pollak offer great support in their roles in the movie but it is the ferocious and intense performance of Jack Nicholson as Col. Nathan Jessep, the man ultimately responsible; that is spellbinding. The ending of this movie when Caffe takes on Jessep is …

A Few good -- actors in a pretty good court drama

Two United States Marines (Wolfgang Bodison and James Marshall) are arrested on numerous charges, including the murder of a fellow soldier who wanted to be transfered in exchange of information of an incident at their base at Guatanimo Bay, Cuba. "Lt. Daniel Alistair Kaffee" (Tom Cruise), a lawyer who always plea-bargined his way to a win without entering a courtroom, is assigned to defend them.

"Lt. Kaffe's" first problem is to handle "Lt. Cmdr. JoAnne 'Jo' Galloway" (Demi Moore), who wants to be on the case so bad she gets the permission of "Pvt. Downey's" "Aunt Ginny" (Maud Winchester) to take over his part of his case. "Lt. Kaffe" declares himself lead council, with "Lt. Cmdr. Galloway" and "Lt. Sam Weinberg" (Kevin Pollak) as co-assistant council. His second, to keep his clients …

Did anybody else bust a gut during the scene when they're in Cuba having lunch and Jack Nicholson is talking about how there's nothing sexier than waking up to a woman you have to salute in the morning?