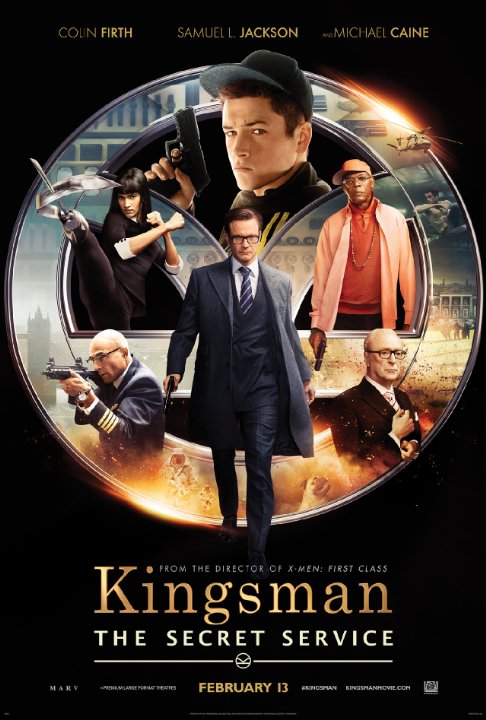 Plot: A street-wise punk with a set of fast hands (and a faster mouth), finds himself recruited by an underground spy agency. If he can pass their test, he will be one of the new initiated into their ranks - just a threat from a twisted tech genius threatens the world. -- Chris Kavan

It borrows from the greatest and most well-known action and spy thrillers, but is doesn't rehash or copy them word for word. "Kingsman" is filled with enough excitement and originality to stand on its own.

Despite some attractive actors and costumes, I couldn't get into the "zaniness" of it all.

Much as he did to superhero movies with Kick-Ass, Matthew Vaughn has taken the classic spy film and given it a fresh set of paint with Kingsman: The Secret Service. A lot of nods here and there to the many classics that have come before them, but also a lot of fun. A movie that is as stylish as it is action-packed and proves Vaughn is a master at making what is old new again.

Disappointing Movie To Say The Least!

This movie totally let me down... With the cast it had, I had huge expectations... HUGE... And I enjoyed the 1st hour or so... But the last half ruined the whole movie for me... Ruined it... Samuel L Jackson and his crooked cap just annoyed me... The over-dramatized action in the last 30 minutes was too over the top. Huge disappointment. Colin Firth held his own... In fact he was the best thing about the movie.. But his death started the spiraling downfall... Even Michael Caine was not at the top of his game.... This just missed being added to my Top 100 Worst Movies of all-time. Maybe I over analyze movies... But I don't think I can stomach watching it again. And to think I bought it in Blue-ray....... I would love my 2 hours and $23 back. Any takers? LOL...

I am offering you the opportunity to become a Kingsman.
A tailor?
A Kingsman agent.
Like a spy? Of sorts. Interested?
You think I've got anything to lose?

I'm not a big fan of Bond films. Too clean, too boring and too stiff. And there was always Q who came up with some new inventions and coincidentally they came in handy in that movie. I would love to own his crystal ball. Also, every movie was stuffed with action, but you'd never see a speck of blood (Before all Bond fans react furiously: I admit that I haven't seen all Bond-movies. So I could be wrong on that part). And in every film a bunch of gorgeous ladies paraded around, but I've never seen a millimeter of offensive nudity. "Kingsman : The Secret Service" feels like a James Bond flick, but then provided with all these …

A young council estate tearaway is recruited by a covert group of international super spies in their attempt to foil the plans of an internet billionaire. James Bond gets the Kick Ass treatment in another enjoyably off-beat and humorous action movie from Matthew Vaughn. There's a lot to like about Kingsman; the jokey homages to old school Bond and British espionage films in general, the frenetic and exciting action sequences and the enjoyably tongue in cheek performances from Colin Firth, Michael Caine and Jack Davenport served up with a liberal dollop of class-related comedy. Although it does take a lot of cues from the afore-mentioned movies, its tone and combination of post modernism, humour and stiff-upper lipped Britishness reminded me most of classic swinging 60s cult TV series The …

No posts have been made on this movie yet. Be the first to start talking about Kingsman: The Secret Service!