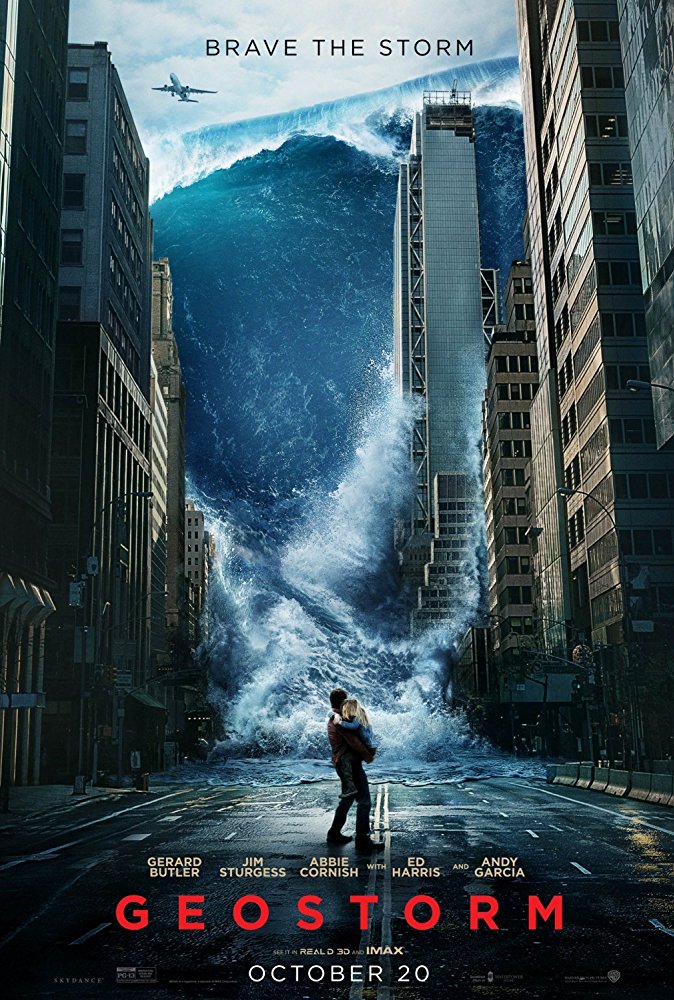 Plot: Code named Dutch Boy, when climate change threatened the world, nations united to set up a satellite network armed with geoengineering technologies in order to protect catastrophic natural disasters. For two years the program has protected mankind, but an alarming change has taken place and now the satellites that are supposed to protect man are instead about to unleash a geostorm that may wipe out the population. A pair of estranged brothers work to figure out what is causing the problem before the geostorm hits. -- Chris Kavan

Although there were times I was mildly entertained, "Geostorm" is a dumb, corny, off the shelf disaster flick with predictable outcomes, a convoluted third act, and nothing to say about current climate affairs.

If you've seen one nearly end-of-the-world disaster movie, you've seen them all - except this one stars a sleep-walking Gerard Butler, who couldn't be less interested in his role. Sure, some of the weather effects are kind of cool, but the science behind them is wonky as hell - plus, way to absolutely waste Daniel Wu in a throwaway role. There has to be a better way to address climate change, right?

Dean Devlin makes his directorial debut with the relentlessly mediocre disaster flick GEOSTORM. It is simply a Frankenstein's monster created from the worst impulses of his frequent collaborator Roland Emmerich (ID4, 2012, Stargate). Gerard Butler playing the material absolutely straight is admirable as in his other CGI stinker GODS OF EGYPT. Speaking of which, the visual effects are wildly inconsistent. Some shots look decent while others look the level of a television movie. Given that Dean Devlin had worked a lot in television, perhaps that's not surprising.

It's not a complete disaster.

âLook, I know youâre not gonna like it but as I see it, thereâs only one person to go after for this.
Your brother, Jake.â

âGeostormâ adresses an issue which is highly topical currently. The influence we have as human beings on the climate. And the consequences this has on our environment. Is it really true weâll be bathing in the shadow of the Cologne Cathedral in the future ? And will polar bears slowly exchange their winter fur for a thinner version, in such a way that after a few decades they look like oversized hairless Sphynxes ? Or will we be continually plagued by natural disasters thatâll cause a multitude of victims among the population? The same problems are presented in âGeostormâ. Fortunately, they had more visionary spirits and they joined forces …

No posts have been made on this movie yet. Be the first to start talking about Geostorm!