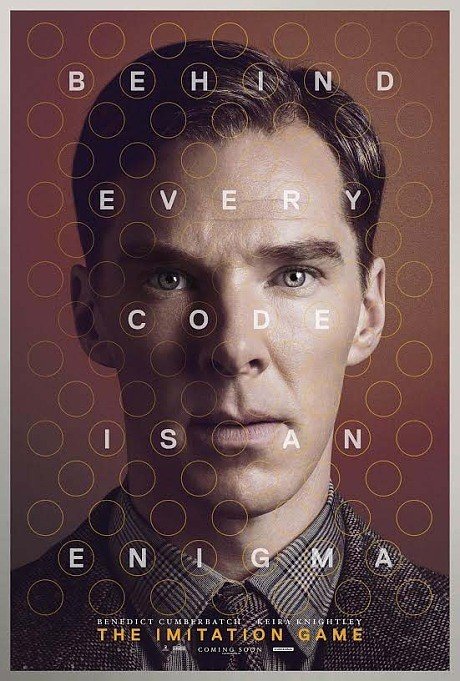 Plot: The true life story of the English cryptanalyst, mathematician and logician Alan Turing. During WWII the Turing led a group of code breakers at a top secret facility in Bletchley Park during the darkest days of the war in order to crack the German's Enigma code. -- Chris Kavan

An incredible, well-acted biopic that honors its subject as a hero when his contemporaries didn't.

Benedict Cumberbatch has never been better as the "odd duck", brilliant Englishman Alan Turing. His personal life, and struggles, are just as compelling as his effort to break the German Enigma code - and his ultimate fate exposes a dark, painful history that shows even the greatest minds can be brought low by stigma and witch hunts.

Some of the most clichÃ© dialogue, and most boring and predictable plot I have ever witnessed. A failure on every level. I was bored out of my mind when I watched it to the point where I would just go stand up to stretch and look at a wall because it was more interesting.

Can machines think? This is the main question posed in âComputer Machinery and Intelligence,â a 1950s paper published by Alan Turing. The paper's concepts surfaced in his single-handed design and construction of a machine that broke the German Enigma codes during World War IIâ¦or so the film says. While the historical accuracy of âThe Imitation Gameâ comes into question on several occasions, the outstanding quality of the filmâs acting, direction and story is no enigma.

The movie focuses on the life of Alan Turing, a British mathematician, computer scientist and cryptanalyst. The British Intelligence recruits Turing along with other cryptographic minds to crack the Enigma codes that the Nazis use as secret communication during the war. The filmâs narrative alternates …

An inspiring and effective historical drama highlighting the achievements of the famed British scientist Alan Turing, commonly seen as the father of modern computer science, during WW2. Joined by a top-notch cast that includes Keira Kightley, Mark Strong, Matthew Goode, Charles Dance, and Rory Kinnear, 'The Imitation Game' demonstrates the human condition's capacity for brilliance, innovation, and perseverance under enormously stressful conditions-even if it's that of total war.
Benedict Cumberbatch gives a powerhouse performance as the eccentric and arrogant mathematician Alan Turing who is assigned to help British intelligence break a seemingly impossible Nazi code. Turing strives to beat this challenge and overcome his personal issues (he was gay at a time one could go to jail for …

Brilliant, speechless and some superb acting.

âCryptography is the science of codes.
Like secret messages?
Not secret. Thatâs the brilliant part. Messages that anyone can see, but no one knows what they mean, unless you have the key.
How is that different from talking?
Talking?
When people talk to each other they never say what they mean. They say something else. And youâre supposed to just know what they mean. Only, I never do. So how is that different?
Alan, I have a funny feeling that youâre going to be very good at this.â

Looking back, the above-mentioned conversation between Alan Turing and his school friend Christopher Morcom, is for me the perfect summary of the fascinating life of the intellectual mathematician Turing. The phenomenon he faced throughout his whole life had to do with "decoding". From an …

No posts have been made on this movie yet. Be the first to start talking about The Imitation Game!