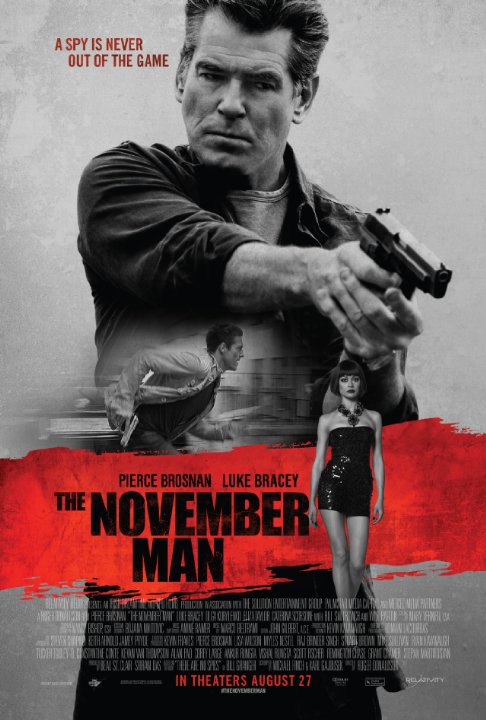 Plot: A one-time CIA agent is brought back to the field to take on his protege as he gets involved in a deadly game involving high-level CIA operatives and new president-elect of Russia. -- Chris Kavan

A decent but unremarkable spy thriller that has former Bond Pierce Brosnan unretire himself from the game in order to help an old friend only to get pulled into a dangerous mission involving the would-be next president of Russia who is hiding a dangerous secret from is past and will kill anyone who can uncover that secret. Of course a former protege happens to be the main obstacle in his path. There is a nice mix of action and intrigue, but it just doesn't have enough originality or oomph to stick with you.

A move that is called November Man, and this movie comes out late September?. The story is about a one-time CIA agent is brought back to the field to take on his protege as he gets involved in a deadly game involving high-level CIA operatives and new president-elect of Russia. The director of this movie (Roger Donaldson) directed such movies like The bank Job and Dante's Peak, and the reason why am bring those movies up is because this director can do so good stuff, but in this movie I think he left his brain off. Pierce Brosnan was fine in the movie and so was Olga Kurylenko. The last 20 minutes of this movie really got going for me but I was already checked out. The November Man is not a terrible movie, but it's not perfect.

The Best Film Ever Made After Jason Bourne Series

Pierce Brosnan rocks in this film i loved it,pierce brosnan returns to action in this film after a long time and boy he nails the role of peter deverux,pierce brosnan was the last true James Bond 007 i really love his performance in everything he is in i am a huge fan he plays a ex cia agent and goes after bad people who double cross him,he wants revenge and all that,i wont spoil the story but it kinda feels like a bond film you know with references like natalya and another agent he trained the fights & action & chase scenes plus its got a former bond girl from quantum of solace 2008 Olga Kurylenko amazing isn't it.

i wish there was a sequel to this or at least 3 films this deserves to be a franchise its got gold written all over it,despite the hate from critics and certain foreign …

No posts have been made on this movie yet. Be the first to start talking about The November Man!