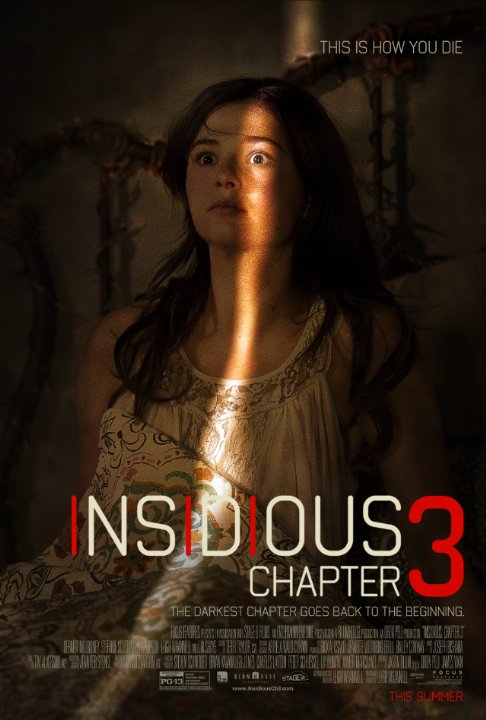 Plot: This prequel takes plays years before the Lambert family experiences own haunting. A younger Elsie Rainier, still a gifted psychic, reluctantly uses her power to contact the dead when a young girl is targets by a supernatural entity. -- Chris Kavan

While not as clever or sharply directed as James Wan's terrifying first film, "Insidious: Chapter 3," directed by the series' screenwriter Leigh Whannell, is much better than the messy second chapter. "Chapter 3" is intense and its story is surprisingly involving. It intelligently employs commendable tie-ins to the other films and manages to find a beating heart and pull some raw emotion out of these characters in the very end. The dialogue and some of the acting is mostly shitty, but who cares? Have fun.

Insidious: Chapter 3 is a prequel that takes plays years before the Lambert family experiences own haunting. A younger Elsie Rainier, still a gifted psychic, reluctantly uses her power to contact the dead when a young girl is targets by a supernatural entity.

Well in Insidious: Chapter 3 we don't have James Wan on the directing chair this time but we do have Leigh Whannell directing this movie and he previous wrote the other Insidious movies and was in the 2004 film Saw playing a character. Now this isn't very new with a first time director who previously wrote movies, did stunt work, acted and people who did the soundtrack to the movie have taken the directors chairs and most of the time it can come off good, but also bad, and in this one it comes off average at best when it …

'Insidious: Chapter III' follows closely in the style of it's predecessors. Once again we get a good old fashioned creepy scare show with a story and characters (mostly) worth caring about. The aesthetic is exactly the same as parts 1 & 2. That familiar well oiled pace consisting of build-up, scare, repeat and increase tensity, is still effective. Many moments did frighten me. I must give major credit for that. This prequel narrative focuses on a new family, but it also adds more to the overall mythology and returning character of Elise. The two blend naturally. Though, I was more interested in uncovering Elise's history. It turned out to be very sentimental. Both her and the young victimized girl overcome their sorrow of past loss in an ending that is less about fighting off …

No posts have been made on this movie yet. Be the first to start talking about Insidious: Chapter 3!