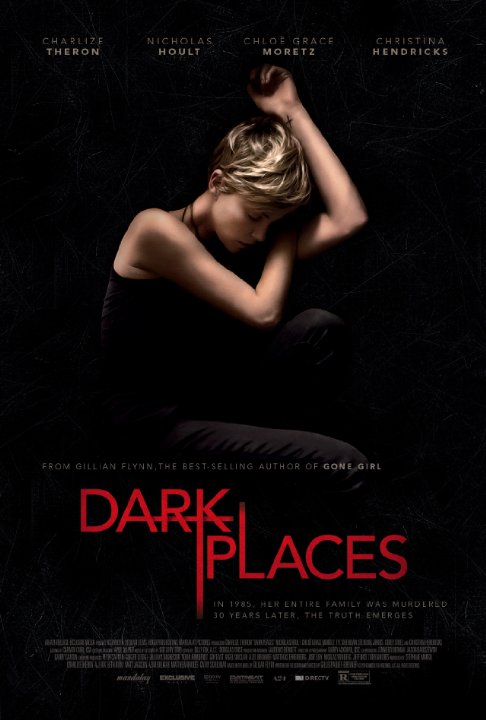 Plot: A woman is forced to confront the demons of her past by reliving the day her family was brutally murdered when she is targeted by a secret society obsessed with solving unspeakable crimes. -- Chris Kavan

When approached by a cabal of amateur detectives determined to reopen the case, the sole survivor of a family murdered in their home begins to question the guilt of the man imprisoned for the crime: her own misfit teenage brother.

Another adaptation of a novel by Gillian Flynn - the author of Gone Girl - Dark Places is a murder mystery with the familiar premise that all may not necessarily be how it seems; false memory, circumstantial evidence and perceptions formed by prejudice and external manipulation can lead to gross miscarriages of justice. The story is told in parallel between current and past events - rather like John Sayles' Lone Star - and features another strong central performance by the ever-watchable Charlize Theron. In fact, technically there is little to fault; the …

To Bury the Past is to Abandon Your Future

Coming out on the heels of the adaptation of Gillian Flynn's Gone Girl, Dark Places is likewise based on the novel of the same name. Now, let's face it, anything following Gone Girl is going to have a rough time and Dark Places is no exception. While it does its best to navigate the twists and turns of a murder mystery, it feels too rote in its execution, despite some good performances.

We follow Libby Day (Charlize Theron) who was only seven years old when the rest of her family was brutally murdered. Her teen brother, Ben, (Tye Sheridan), a fan of heavy metal and (by default in the 80s) Satanism was quickly apprehended and charged with the crime, despite the clear lack of evidence to his involvement. Years later, with sympathy money running out now that she is an adult, Libby …

Dark Places (2015) R Libby (Charlize Theron) was only seven years old when her family was brutally murdered in their Kansas farmhouse. Now itâs twenty-five years later, and she is revisiting the scene of the crime. Fans of Gone Girl (2014) are probably going to be disappointed with this film, also based on a Gillian Flynn novel. Led by two strong performances in Theron and Christina Hendricks (who plays Libbyâs mom ), the film is an intriguing mystery that is let down by some poorly written dialog. The film has a few twists and turns to keep you guessing on who killed Libbyâs family but takes way too long to resolve the mystery. Chloe Grace Moretz gives probably the worst performance of her career as the bad girl who gets involved with Libbyâs brother (Tye Sheridan). Dark …

No posts have been made on this movie yet. Be the first to start talking about Dark Places!