Get on Up Movie Information 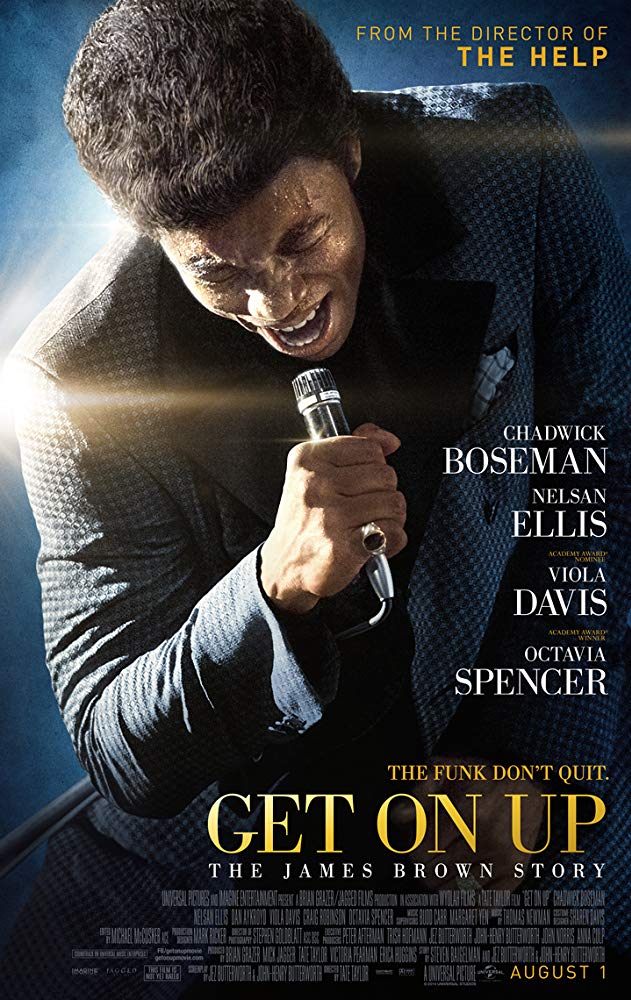 Plot: The story of James Brown - who was raised in extreme poverty, but overcomes a troubled childhood to become of of the most influential musicians of his generation. -- Chris Kavan

Chadwick Boseman is James Brown. He got the dancing, voice, and mannerisms down. While the movie itself was very messy and at times lost it's focus. A little bit too long as well with some musical scenes dragging on at times. Still, Chadwick Boseman performance makes this movie memorable. I have to admit, I got a bit teary eyed watching this, not because of the movie, but because how we lost such a talented actor to a horrible disease.

The fact that this musical biopic takes a non-cliched narrative route is both it's best and worst asset. We see important moments in Brown's career told in slightly linear fashion, while other character building scenes (from different ages) are shown out-of-order amidst his rise to fame. I like this format. The downside is that it feels like multiple plot points are thrown together with little resolution. Besides this slight imbalance, the film is well done. The musical performances are terrific. However, the major reason to see this film is for Chadwick Boseman's impeccable portrayal of James Brown. It's good enough for an Oscar nomination at the least and I'd be surprised if Boseman doesn't receive the recognition.

The Godfather of Soul gets the royal treatment in the Mick Jagger production âGet On Up.â The life of James Brown, who was also known as âthe hardest working man in show business,â is grittily portrayed by Chadwick Boseman. The nonlinear film jumps in and out of the life and times of James Brown, opening with the humorous yet tragic incident that landed him in jail. Incensed by the neighboring businessâ refusal to refrain from using his dry cleaning businessâ bathroom, Brown interrupts their meeting with a diatribe for the ages-riffle in hand. We then are ushered back to Brownâs roots in rural Georgia. We see him as an innocent child who witnesses the complex abusive and sexual relationship of his father(Lennie James) and mother (Viola Davis).

Get On Up is a mediocre movie highlighted by a fantastic performance from its leading man. The plot is so-so and itâs direction pretentious. It might have been nothing but an obnoxious bit of failed Oscar bate was it not for Chadwick Boseman. He really putâs his all in to this role.

The movie itself is sloppy. Its plot is basically the same as Citizen Kane, only the details have changed. It also has a ton of plot threads that donât go anywhere, and tries to make up for the fact by using jarring unnecessary nonlinear storytelling in order to disguise the movies incompetence.

I donât know very much about James Brown, but this movie doesnât really paint him in a very good light. His character is also just like Citizen Kane, the main character from the movie of the same …

No posts have been made on this movie yet. Be the first to start talking about Get on Up!