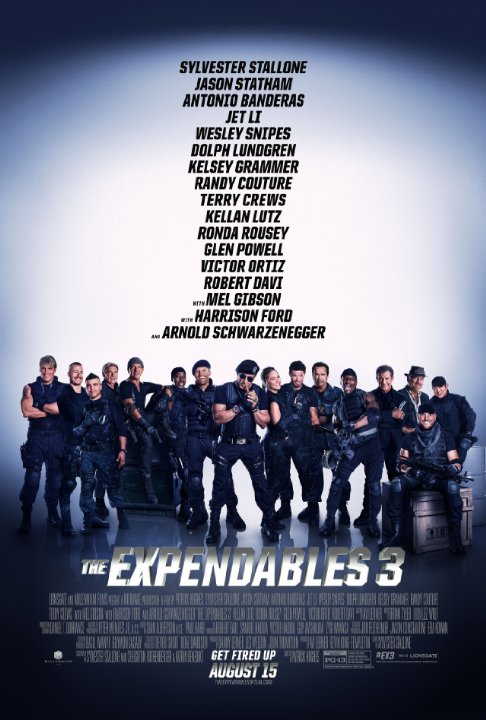 Plot: For Barney Ross, leader of The Expendables, things just got personal. Years ago, he helped found the group with the help of Conrad Stonebanks - but somewhere along the way Stonebanks changed and turned to arms dealing - and Ross was forced to kill him... so he thought. Now Stonebanks is back, and is out for blood. With The Expendables as targets, Ross brings in some new blood - mixing old-school muscles with modern tactics and technology. He's hoping this one-two punch will be enough to bring Stonebanks down... for good. -- Chris Kavan

"I need a job! All I know what to do is kill! Goddammit!"

The first Expendables movie was a hit. A collection of 80's action heroes whose expiration date already expired and look like a pile of shriveled potatoes that have lain too long in the sun. It was a tribute to those legendary years when Stallone, Schwarzenegger, Lundgren and consorts annually kicked some ass in one or other (sometimes cheap looking) action movie. A healthy dose of self-perspective and self-deprecation was abundant, with a wink to the past and using well known one-liners randomly. The second film continued on this momentum with some newbies in it, so that the entertainment value still remained at a reasonable level. And now there is the third part of this trilogy. This movie presents the same again with the …

So what about The Hague again?

I was ready to totally hate this movie for the pg13 rating and the new cast members overshadowing the original crew but to my surprise, the third installment in Stallone's franchise of affectionate throwbacks to 80s action flicks is not as bad as I surely thought it was gonna be.
The film does still suffer from the downgraded rating. You can clearly see it was originally supposed to have been R-rated but what appear to be the more violent scenes are conveniently cut off before they show anything gruesome. But it strangely does still push its rating as far as it can go which is nice with the violence and language.
Also the film's larger budget is put to better use with the action scenes which are all gigantic in scale compared to the last two movies. The climactic battle involving the …

I don't know if it was the fact I was watching the unrated cut vs. the theatrical PG-13, but I actually think The Expendables 3 is better than The Expendables 2 - though it still suffers from issues. It's true that the series is beginning to show its age - as much as the main actors - and this could very well be the last hurrah - but at lease they went out with a big bang.

The opening scenes are a lot of fun - we have a prison transport train rescue - and we get the first glimpse of Wesely Snipes joining our merry band of misfits heroes. Snipes has been out of the spotlight for awhile (he even pokes fun at himself with the "tax evasion" line) but it's nice to see he hasn't lost much of his step. As a knife-throwing ex-medic, he often rubs Lee Christmas (action mainstay Jason Statham) …

No posts have been made on this movie yet. Be the first to start talking about The Expendables 3!