Behind the Candelabra Movie Information 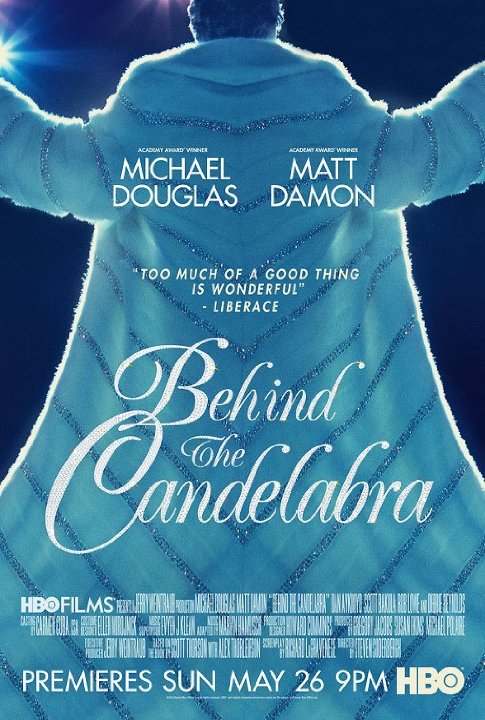 Plot: Based on the autobiography, the film explores the relationship between Liberace and his six-year relationship with young lover Scott Thorson. -- Chris Kavan

What a beautiful film. I haven't seen a lot of movies from last year, but this one is surely to stay near the top of my list. The acting was brilliant, Douglas deserved all of the accolades that he won. Damon probably deserved them as well. The greatest surprise of the film, though, was seeing Rob Lowe with a giant mop on his head. Amazing! Everything about this film screamed excess, from the colors, acting, clothes (which were great) and their homes. I truly believed I was seeing Vegas in the late 70's and early 80's. It even touches on the AIDS epidemic which was sweeping the nation at that time and just the general lack of knowledge that the country had about the disease. This is a must see, everything about it is great!

Based on the autobiography, the film explores the relationship between Liberace and his six-year relationship with young lover Scott Thorson. This movie has outstanding acting and a good cast.

The limelight on the excess.

So, after admitting that Side Effects would be his last film before going into retirement, one of my favorite directors Steven Soderbergh did the most logical thing andâ¦ made another movie.
Well, putting the fact aside that it came out of nowhere, Behind the Candelabra is fortunately one of Soderbergh's best films.

This is most likely the sweetest, most endearing and passionate film I've seen so far this year.
From the opening it sets an amazing tone, skillfully implying the confusion and sexual orientation of Matt Damon's character Scott Thorson. Soderbergh is simply an auteur when it comes to genre movies.
Matt Damon and Michael Douglas are both worthy of Academy Awards. From their costumes and …

Behind the Candelabra review

This reviewer is highly critical when it comes to dark comedies, this was rather average. Scott Thorson (Matt Damon) works as an animal trainer for movies and meets Bob Black, a Hollywood producer, in a gay bar. Black introduces Thorson to Liberace (Michael Douglas), who fancies him and invites him to be his secretary. The score of course was excellent with a lot of piano pieces in full display. Damon was solid as always and Douglas surprisingly effective in this unusual role (compared to his very male related roles). Maybe he was looking for a new/challenging role and since he has worked with the director before with Traffic. Basically it encapsulates the story of the rise and fall of Liberace and how Scott got into the mix. Set pieces were elegant since it does show the …

No posts have been made on this movie yet. Be the first to start talking about Behind the Candelabra!