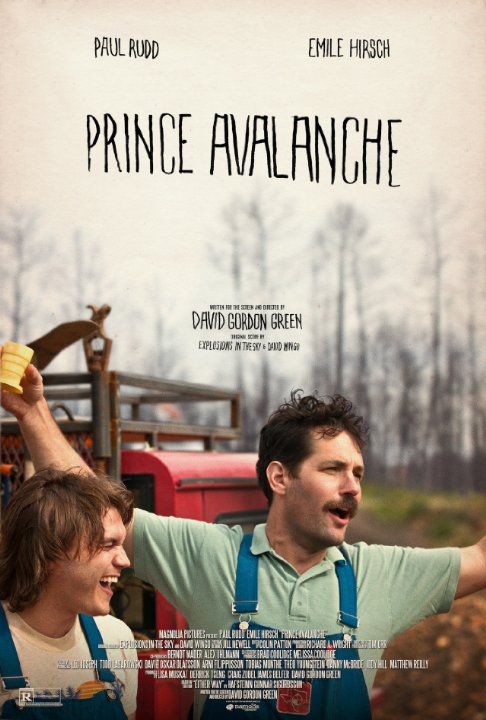 Plot: Set in 1988, two men leave behind their city lives one summer and take their highway road work to a more isolated area. Yet this opens up opportunities for misadventures as the two men find themselves at odds with each other and the women they left behind. -- Chris Kavan

Reminiscent of 1970's "Five Easy Pieces," "Prince Avalanche" is a portrait of seclusion and isolation told from a working-class perspective.

'Prince Avalanche' is a comedic drama of opposites. The two main characters are likable, honest, and a little quirky. I enjoyed their disputes and eventual becoming of friends. The dialogue contains many funny quips. It's a pleasant watch.

David Gordon Green shot Prince Avalanche in just 16 days. Yet watching Paul Rudd and Emile Hirsch on screen - you would think the two had spent far more time together. The strength of this film is based entirely on the connection between Rudd and Hirsch, and the two give an amazing performance that elevates this film to the next level.

Essentially we follow Alvin (Rudd) and Lance (Hirsch) as they work on a highway during the summer of 1988. Lance is the brother of the woman Alvin is dating and it's clear the two don't see eye to eye. Alvin is trying to learn German - planning for an upcoming trip, and he is the type of person who thinks he's always right - even when it couldn't be further from the truth. Meanwhile, Lance is the immature slacker - more worried about his next conquest …

It's about time that the indie David Gordon Green has returned, instead of giving us another "comedy" misfire like The Sitter and Your Highness (I really liked Pineapple Express, however). He's made wonderful, low-budget films which include All the Real Girls and Undertow, so I'm happy to see that he returned to independent filmmaking being that it's obviously his strongest point.

His latest effort, Prince Avalanche, is just a really fun movie. The weight of the film is the chemistry between Paul Rudd's character and Emile Hirsch's character, but Green leaves the door wide open for his always wonderful cinematography, low-pitched but energetic story and characters, and a really heartfelt underlying theme that makes Prince Avalanche a true gem. It's also pretty funny.

No posts have been made on this movie yet. Be the first to start talking about Prince Avalanche!