Would You Rather Movie Information 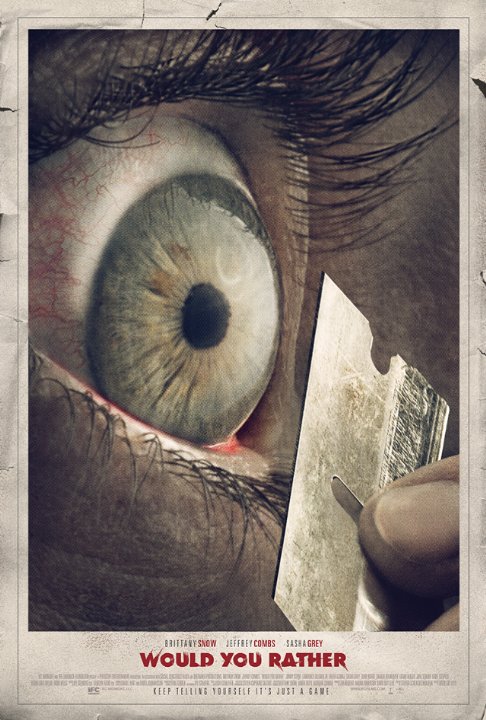 Plot: A group of desperate strangers are invited to a wealthy man's dinner party, where they are forced to play a fatal game of Would You Rather, where the winner wins a grand amount of money and the losers meet an unfortunate end.

Such an eclectic cast (June Squib - the firecracker from Nebraska, Sasha Grey, former adult star, current Gotham Penguin Robin Lord Taylor and former Walking Dead star Lawrence Gilliard Jr.) - but it's Brittany Snow who gets top billing in this intense and chilling horror offering. The suspense is palpable as a disparate group of people are brought together to play a life-or-death (literally) version of "Would You Rather?" put on by a sadistic man and his charitable organization (they probably get along great with the Hostel hunting club guys). While there are plenty of plot holes and a rather mean ending - overall, an enjoyable horror offering.

This is a thriller in which most of the runtime consists of people causing pain and death to one another. However, unlike other torture style films, this one does not rely on gore and senseless violence. In fact, the 'squeamish' moments are kept off screen while the pain and bloodshed are presented more realistically. 'Would You Rather' becomes exactly what the title suggests. It's a game where morals have to be thrown out in a 'go for it or die' situation. Quick judgement and survival are all that matters. The game progressively worsens as stakes are raised for the contestants. And, as such, the tension is maintained throughout by building on the escalating dread of what is to come next. Surprisingly good all around.

No posts have been made on this movie yet. Be the first to start talking about Would You Rather!