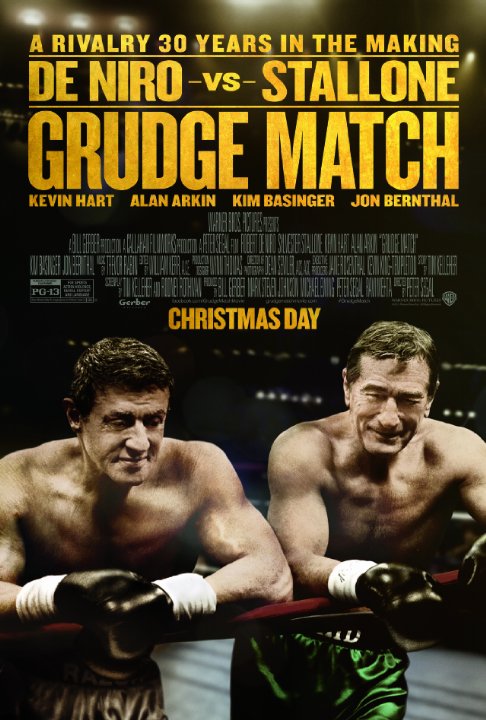 Plot: Two over-the-hill boxers, Henry 'Razor' Sharp and Billy 'The Kid' McDonnen, have long hung up their gloves. But an offer to come out of retirement, 50 years after their last match, coaxes the two men back into the ring for one, last fight. -- Chris Kavan

It has undeniable star power, but not very many funny moments. The plot is thin and doesn't deliver what Stallone and De Niro fans want and deserve to see.

Grudge Match smartly casts former Film Boxing experts Stallone and DeNiro but there ends the inspiration that was put into this Movie. Clunky Dialog and poor pacing labor mostly throughout. The cast includes a stiff Kim Basinger, Jon Bernthal in Walking Dead mode and the over saturated Kevin Hart. DeNiro and Stallone do have a few funny lines between them but the best and most genuine laughs come from Alan Arkin as usual. An exceptional cast is sadly wasted on mediocre writing and uninspired Direction. Both leads have made worse Movies but this was a disappointment even going in with low expectations. Good DeNiro and Stallone. Better Arkin. Lame Script with so soDirection. My Grade- 2 Joints Stoney McStonerson

Although being overdone as far as storylines are concerned I have to say this was an enjoyable watch. Great cast selected by director Peter Segal (Get Smart, The Longest Yard, 50 First Dates) especially Alan Arkin who portrays Lightning Razor's (Stallone) lifelong trainer in the film. Arkin is always an enjoyable presence onscreen. Quite a few humorous bits throughout especially the ongoing banter between both Deniro and Stallone's characters ...Would I watch it again?....Probably not...

No posts have been made on this movie yet. Be the first to start talking about Grudge Match!