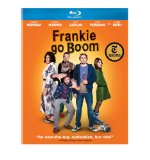 Plot: Frankie has been the subject of embarrassment and humiliation at the hands of his brother, Bruce his entire life - often on camera. Just when he thinks he has escaped this part of his past - things turn out even worse. -- Chris Kavan

Adequately funny comedy. Wacky shenanigans and characters populate an average story. It's got enough laughs that I found it mildly enjoyable.

No posts have been made on this movie yet. Be the first to start talking about 3, 2, 1... Frankie Go Boom!