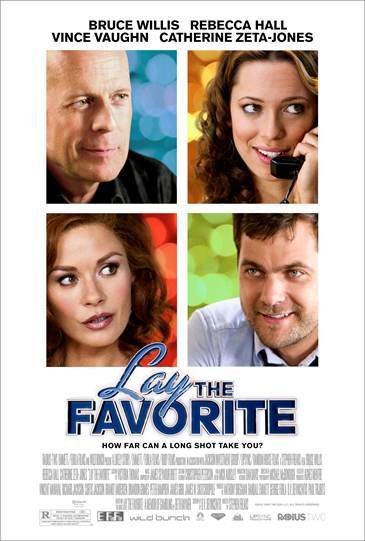 Plot: A cocktail waitress, a sports gambler and his jealous wife - in Las Vegas Dink finds out Beth has a knack for gambling - but his wife Tulip is none too happy about the initial relationship. -- Chris Kavan

it was a ok light hearted movie about gamberlers who bet for a living on all sports .. i thought it was interesting the lead actress rebecca hall spent much of the movie in tight shorts and low cut tops. which was one of the best things about the movie lol. was also nice to see bruce willis playing a more likeable light hearted role. worth watching with a stella cast. worth it just to watch the bruce willis dance at the end with zeta jones. funny

Lay It On Smooth

This is a character-driven film all the way. The great thing about it is that those characters are much different than what you expect having seen the actors involved over the years. The story isn't exceptional, but it holds together enough to interesting. Even if you don't know a thing about gambling (or don't care) - it opens up enough if this slice of life to prove not everyone involved in the trade is an oily, greedy monster.

That brings us to our lineup. Bruce Willis is the main gambler, Dink Heimowitz - and if all you know him from is Die Hard or other action films, he really manages to present an entirely different facet. He's insecure, he's under the thumb of his wife, Tulip (Catherine Zeta-Jones) and - dare I say - even vulnerable. When he gets mad, you get a hint of John …

Not as entertaining as some gambling sports movie are, even with name stars. A true story about a girl's adventure named Beth Raymer (Rebecca Hall) who meets a successful married entrepreneur engaged in the gambling sports world named Dink Heimowitz (Bruce Willis). Hall was somewhat uninteresting but Willis and Catherine Zeta-Jones were worth watching in their roles. It's always fascinating how Willis can still be watchable no matter how bad or good a picture is. Jackson trying too hard to be charming, was uninteresting. Not really funny but worth viewing because of the nature of business Beth was involved in. Lay the Favorite may not be that hilarious fr a genre, it does however represent how luck and friendships can make a huge difference for a former on call stripper.

No posts have been made on this movie yet. Be the first to start talking about Lay the Favorite!