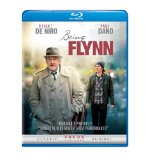 Plot: A young man working at various homeless shelters in Boston has frequent run-ins with his brilliant yet troubled father. -- Chris Kavan

A film from the 2004 book by poet Nick Flynn which gives us an idea of the world of homeless people. Nick Flynn (Paul Dano) was surprised to get a call and ask for assistance from his estranged father, Jonathan (Robert De Niro). Dano gives a sincere portrayal but De Niro clearly shows his gifted talents, which proves that he still has that touch if given the right role such as this. Jonathan is a confident, racist, stubborn, ill-tempered writer-poet who is a survivor, yet you empathize with him because of Robert De Niro's brilliance. Even Moore was solid and touching despite limited screen time for her character. Despite the weak screenplay which makes the movie a bit bland, there were some interesting lines such as "It's hard to stay changed," Jonathan - "It's a wonderful life." …

kw Movies to Get by kwaz48

No posts have been made on this movie yet. Be the first to start talking about Being Flynn!