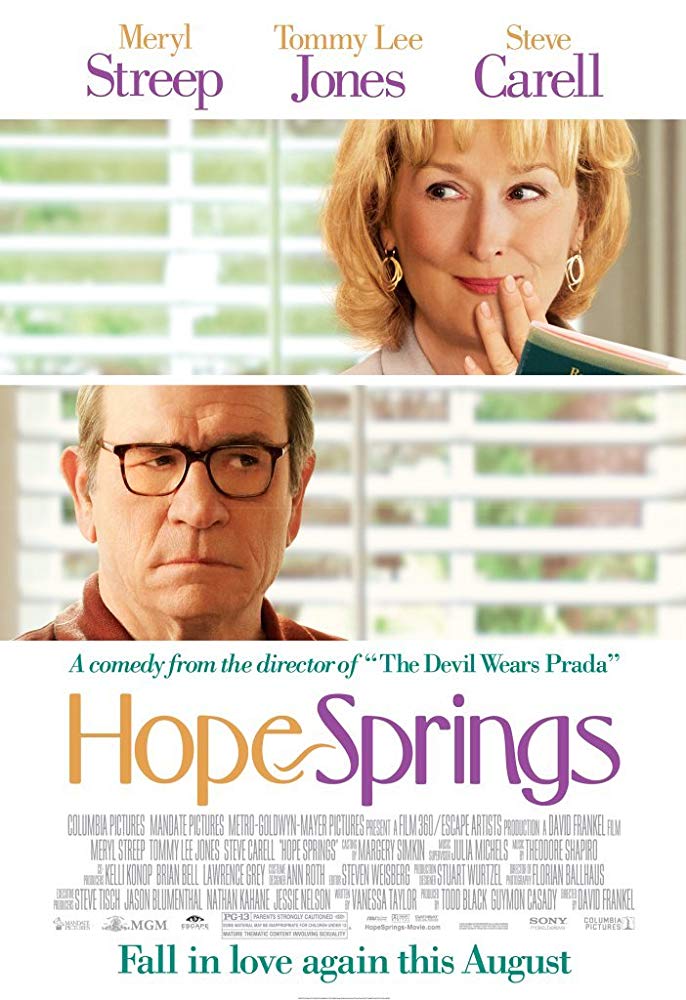 Plot: After 30 years of marriage, a middle-aged couple aren't sure where their relationship is headed. They decide that an intense weekend of couples therapy will decide where they ultimately end up. -- Chris Kavan

Kay and Arnold (Meryl Streep and Tommy Lee Jones) are a married couple with two kids and thirty-one years of marriage. Both have fallen into a complacent life together devoid of intimacy and communication. In short there is no spice in the marriage anymore. Every morning, Kay cooks up a slice of bacon and two eggs sunny side up for Arnold, who sits at the kitchen table with his head buried in a newspaper. Every night, after dinner, Arnold falls asleep in front of the TV, which is tuned to the Golf Channel. We eventually learn that they have not had sex in nearly five years, Arnold is perfectly content to leave things as they are, while Kay realizes that changes need to be implemented if their marriage is to survive.

You know how, when you are young and in love, you believe that marriage will be just one big continuous moment of romance, laughter, -- and sex? Well, please allow Tommy Lee Jones and Meryl Streep to slap you upside the head with some reality â¦. and possibly cause you to swear off marital bliss indefinitely.

THE GOOD: From the director of âThe Devil Wears Pradaâ comes the movie âHope Springsâ, a dramatic comedy that gives us a somewhat depressing yet oftentimes hilarious insight into the 31 year marriage of Kay (Streep) and Arnold (Jones), a couple who eat the same breakfast every day before work, and watch the same tv show everynight â before they retire to their separate beds â¦. in separate rooms. Kay has had enough, and signs them up for intensive couples therapy …

It goes without saying that Meryl Streep is a phenomenal actress, but in Hope Springs this was the first time I actually found her insufferable. But I found the entire film to be just the same. It attempts to be this mature romantic dramedy for the elderly, but it's actually quite depressing and aggravating on many levels. Jones' character I wanted to die about 5 minutes in. There is no charm to be found here, unless you want to watch Streep and Jones talk about their sex life and experiment with each other for nearly 2 hours, and then argue on and on. I just wanted to shout SHUT UP ALREADY! Carrell does a good job as a mild mannered therapist, but there's some strange creepiness underlying the whole film that made me want to gag. I may be in the minority here, but I hated this film.

Movies I Want To See by Shelley

No posts have been made on this movie yet. Be the first to start talking about Hope Springs!