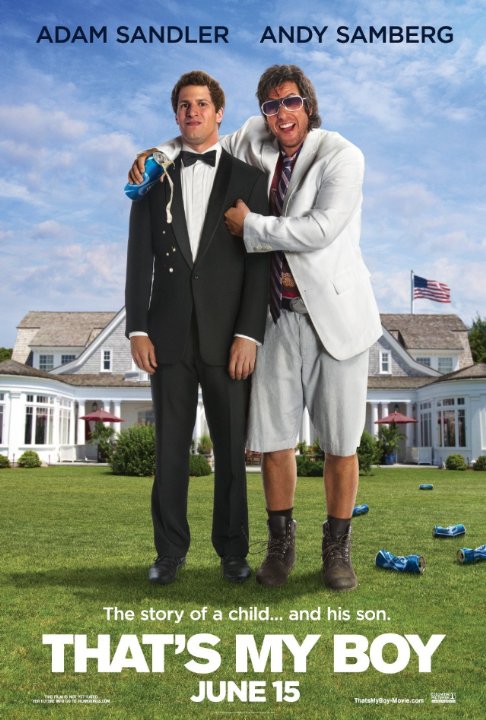 Plot: A father moves back in with his son just as he's about to get married and butts heads with his bride-to-be. -- Chris Kavan

There's not a single redeeming or funny moment in this offensively disastrous comedy.

The story is about a father moves back in with his son just as he's about to get married and butts heads with his bride-to-be. This movie sucks.

That's My Boy started off hilarious & was funny up until the teacher went off to prison & the kid grew up.After that the movie started going downhill.It did have a ton of funny LOL moments but it's just not a movie I'd rent, buy or ever watch it again.I guess the start of the movie got my hopes up that I thought I was going to like this movie so I was disappointed that I didn't.Too be honest, I can't even remember the last Adam Sandler movie I actually liked

I thought this would be funny because Adam Sandler was in it but watching a young kid (Donny) in middle school getting seduced by his teacher even when he put the moves on first then being applauded by his classmates and teachers is not raunchyâ¦itâs just gross! No doubt this is every fourteen year old fantasy but forgive me if I donât find it amusing when the teacher in question finds herself pregnant with Donny's child and is sentenced to spend 30 years in prison. For the next few years, Donny had to take care of their son, Han Solo.

It's now present day, and Han has changed his name and life to get away from Donny, who is in trouble with the IRS and owes $43,000 in taxes and if he can't come up with the money by the end of the next weekend he'll be forced to go to prison for …

Worst All Time by Matt

No posts have been made on this movie yet. Be the first to start talking about That's My Boy!