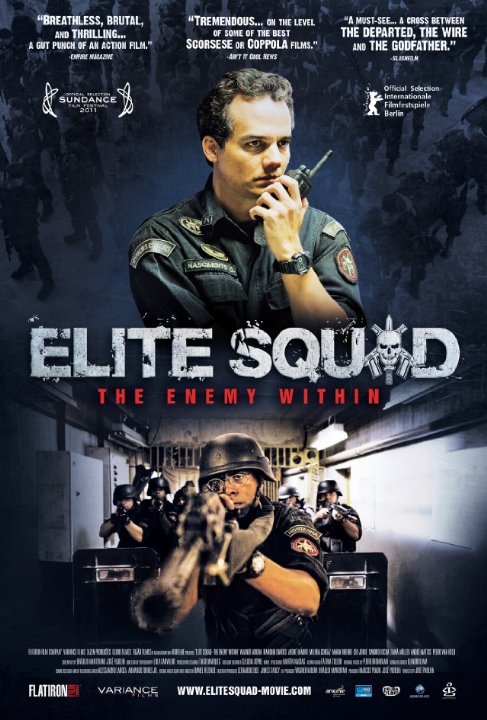 Plot: After a prison riot, Captain Nascimiento, now a high-ranking security officer in Rio de Janeiro, is swept into the largest operation against drug traffickers: a bloody political dispute that involves government officials and paramilitary groups.

Amazing movie that portrays a reality of the political system of Brazil. A unique critique on how corruption is linked to government agencies and public safety.

"Elite Squad: The Enemy Within" by Yojimbo

Captain Nasciento is promoted to the Intelligence Agency and uses his BOPE units to clear the drug trade out of the city, unwittingly allowing the corrupt militia to fill the empty criminal power vacuum. Jose Padilha's sequel to the entertaining if morally dubious Elite Squad is a similar expose of the crime and corruption of modern day Rio de Janeiro, peppered with some brutal action sequences and coloured with nothing but various shades of morally ambiguous grey. Padilha's script is actually rather more nuanced than that of the first film, which tempers the fascistic overtones as Nasciento comes to find common ground with the lily-livered liberal Fraga when he realises that they both want the same thing; justice. It also attempts to address the corruption of the system beyond the …

Movies I Want To See by M3tr4nk0

No posts have been made on this movie yet. Be the first to start talking about Elite Squad: The Enemy Within ( Tropa de Elite 2 - O Inimigo Agora Ã Outro )!