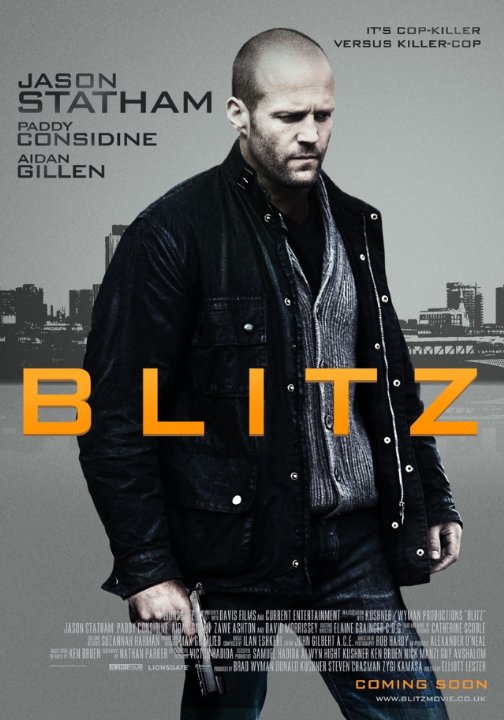 Plot: A tough cop is on the trail of a serial killer who targets police officers. -- Chris Kavan

The story is about a tough cop is on the trail of a serial killer who targets police officers. This movie is a good drama movie with a thriller ending and a little mix of comedy.

Typical Jason Statham action mixed with the story of a serial killer who happens to target cops. Nothing special, though fans of Statham will be most entertained - he happens to play a decently smart individual - but his fists still do most of the talking.

A temperamental cop Detective Sergeant (DS) Tom Brant (Jason Statham) helps PC Elizabeth Falls (Zawe Ashton), an undercover cop that becomes a junkie. Barry Weiss (Aidan Gillen), the person responsible in the cop killings, was released after being imprisoned. Overloaded with swears, drugs and lousy acting. Story was executed in a snail pace while the antagonist was too obnoxious. The upbeat soundtrack and firepower of Statham couldn't save this. Blitz was dull for an action flick.

Statham's fans will not be disappointed!

A word of advice: If youâre picking the wrong fight, at least pick the right weapon.

Jason Statham is a bad tempered London policeman whose methods are sometimes somewhat politically unacceptable. There is a demented serial killer who is killing police officers, and Statham is part of the task force hunting him down (when he is not doling out street justice with a hockey stick). Paddy Considine is the homosexual detective who partners up with Statham and a very beautiful Zawe Ashton hits the right dramatic notes as drug addicted rookie cop Elizabeth Falls.

If you are expecting Crank, Lock, Stock and Two Smoking Barrels, or The Transporter, stay away but if youâre in the mood for a gritty, no-take-prisoners crime thriller then this one might be right up your alley.

No posts have been made on this movie yet. Be the first to start talking about Blitz!