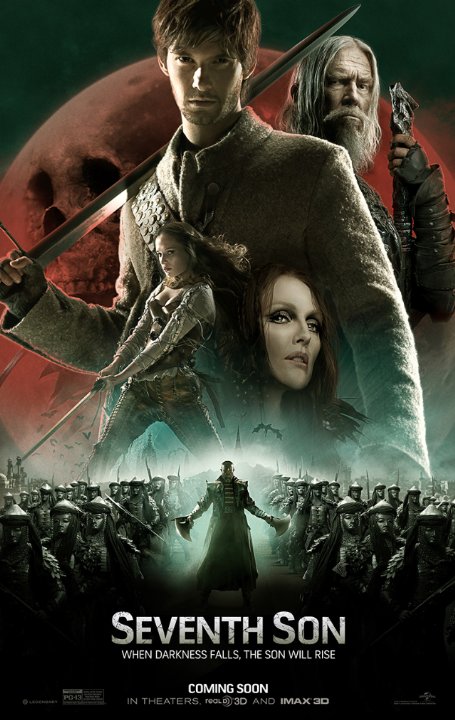 Plot: John Gregory, seventh son of a seventh son, protects his country from witches, ghouls and other creatures. But his time is coming to an end, and he needs to find an apprentice to continue his work. Unfortunately, everyone he has tried to train has died but his last hope lies in local farmer's son Thomas Ward. But when a dangerous witch named Mother Malkin escapes, it will be a dangerous test of his Spook skills. -- Chris Kavan

Established actors Jeff Bridges and Julianne Moore play dueling sorcerers in this dark fantasy action flick. They do their best to elevate the material above its source material (based off a Y/A series of course). But it's soon lost amidst a slew of CGI overload and genre cliches.

The film gets one star for Ben Barnes, who makes a likable and smolderingly handsome lead. Otherwise the film is a black hole of creativity, originality, and intelligence.

This one was downright ridiculous at times.

&#733;You've spells, boy. What kind? Sometimes I...I see things. Things that haven't happened yet. Could be useful. Not the passing out part of course, but the visions.&#733;

Take the cartoon "The Sword in the Stone", add in a few ingredients of "Willow" and use a diminutive small portion of "The Lord of the Rings" and you'll get "Seventh Son" as a result. The umpteenth adaptation of a series of youth books and again a contribution to the fantasy genre. Now, I'm a huge fan of fantasy. Start a movie in which knights, magicians, dragons, trolls, witches, gnomes and other mythological creatures are introduced and I will be completely absorbed in this fairytale world. Unfortunately, this film is a huge mishmash of multiple facets of previously released movies (which at first sight …

No posts have been made on this movie yet. Be the first to start talking about Seventh Son!