Too Big to Fail Movie Information 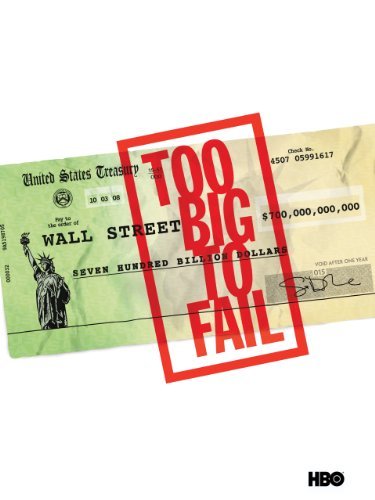 Plot: In 2008 a financial crisis threatens to cripple the United States and Treasury Secretary Henry Paulson is at the center of it all. -- Chris Kavan

"Too Big To Fail" by Yojimbo

Too Big To Fail is a dramatization of the 2008 banking crisis that attempts to explain the situation in terms the layman can understand. Thanks to smart scripting and an excellent cast it is successful, and any right minded person cannot help but be infuriated as to how it all arose; the story is essentially that of a group of entitled, rich men in suits who gambled away the entire economy for the sake of their own quick and easy profit, enabled by a complicit establishment who were either too weak or self-serving to say no to them. The film is careful not to implicate any government officials, but clever use of actual news footage makes it obvious how the situation was allowed to come to pass through "deregulation" and it is impossible not to see how the revolving door policy between …

Too Big to Fail

Too Big To Fail is a solid, informational film that breaks down the financial crisis of 2008 in layman's terms for the average viewer to understand. Greed in the highest level was the start of the crisis and once every hand was in the cookie jar hoping to get a piece of the action, financial meltdown quickly became the topic of the nightly news.
The actors came through with great performances. It is difficult to take a dry topic of finance and make it a must-see movie, but Too Big to Fail provided excellent intellectual exchange. William Hurt as Henry Paulson is a strong performance, showing a man who was at the mercy at the cooperation of global banking institutions. The financial crisis is hard to relive, but I feel it must be understood if society is looking to prevent another Great …

To See: Business Movies by Alex

No posts have been made on this movie yet. Be the first to start talking about Too Big to Fail!