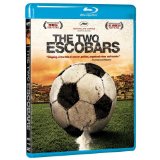 Plot: Follows the intertwining (though not blood relation) lives of drug kingpin Pablo Escobar and Colombian soccer star Andres Escobar - culminating in Andres' disastrous "own goal" against the U.S. at the 1994 World Cup in Los Angeles - a mistake that ultimately cost him his life. -- Chris Kavan

Probably the most widely-regarded of the ESPN 30-for-30 documentaries - and it warrants the praise it has received. Jeff and Michael Zimbalist craft the film by managing to bring in some huge names - soccer stars, politicians, people who were close to Pablo Escobar, relatives of both men - and it through these personal connections, while tying together drug trafficking with the rise of soccer, that makes this so compelling. Certainly among the better offerings and highly recommended.

No posts have been made on this movie yet. Be the first to start talking about The Two Escobars!