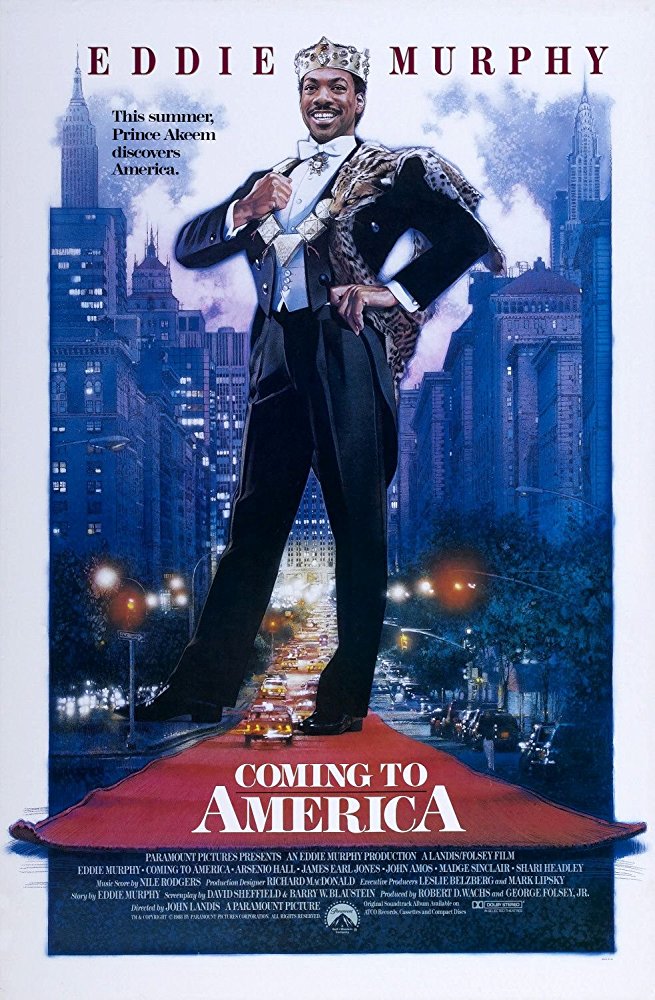 Plot: A prince from the African kingdom of Zamunda comes to Queens, New York to find a suitable bride that he can respect.

Not as funny as "Trading Places" and not as memorable as "Crocodile Dundee," but this was one of Eddie Murphy's landmark hits of the 80s.

The film is about a prince from the African kingdom of Zamunda comes to Queens, New York to find a suitable bride that he can respect. This movie has funny sences and eddie murphy loves to be in drag.

This is one of my favorite movies of all time! Great story by Eddie Murphy! This movie maybe Hollywood's official introduction to actors playing multiple characters the way Murphy and Arsenio Hall did in this film. Coming To America is a movie that has so many memorable lines, top-tier actors like James Earl Jones, and John Amos, and also it's wrapped up in a love story. A prince traveling to Queens to find his princess. I don't know how long director John Landis filmography is, but after Thriller and Coming To America, he could've went into retirement. If you haven't seen this film, you've been living under a rock!

Coming To America, for me, is a bit of a disappointment. It's one of those films that comes along every now and then, which, while being by a director who's proved his credentials with films like Animal House and An American Werewolf In London, is a little less than great.

Perhaps it's a little unfair of me to suggest that all the blame for the film being a bit 'so what' lies squarely at Landis's door. Although the movie seriously lacks his directorial flair, most of the blame should be put the way of the script.

The script also falls down in the material stakes. What I mean by that is, surely, if you've …

Eddie Murphy has been one of the funniest comedians around. The performers include Arsenio Hall (with 4 roles mainly Semmi), James Earl Jones as King Joffer, Madge Sinclair as Queen Aoleon, Shari Headley as Lisa McDowell and John Amos as Cleo McDowell, the owner of the McDonalds ripoff McDowells. A Prince from Zamunda tries to find a bride in America, Queens New York to be specific since it the prince says "What better place to find a queen than the city of Queens?." Eddie Murphy stretches his acting ability with 4 roles before his role Nutty Professor began. He became Prince Akeem, Clarence, Randy Watson and Saul. Coming to America has probably one of the best comedic scenes on film. The servants aiding the prince in his usual morning routines of brushing his teeth and bathing him …

No posts have been made on this movie yet. Be the first to start talking about Coming to America!