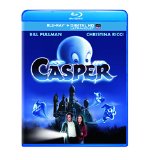 Plot: Ghost doctor James Harvey is hired by Carrigan Crittendon to rid Whipstaff Manor of spirits so she can find a treasure trove rumored to be hidden there. But her plan backfires when James's daughter Kat (Christina Ricci) befriends Casper, the friendly phantom who inhabits the place along with The Ghostly Trio, who disdain humans.

Better for kids and not my kind of thing.

A pretty good family film - the effects (for the time) are quite good, and I don't think you can ever go wrong with Christina Ricci. It might not blow away your kids today, but it's still a solid choice as far as I'm concerned.

The story was good if only Casper had better character development. Bill Pullman and Christina Ricci were superb coupled with the charming screenplay. The special effects were realistic, unfortunately this didn't do well financially. Casper is a worthy family comedy that entertains.

No posts have been made on this movie yet. Be the first to start talking about Casper!