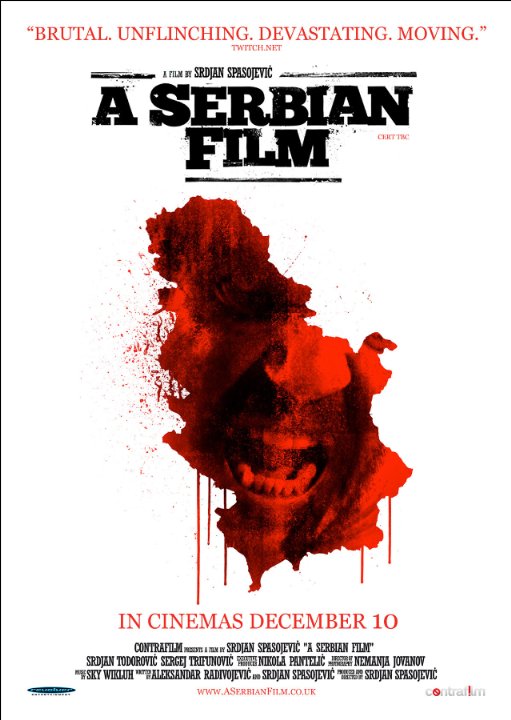 Plot: A retired adult film star trying to support his family in Serbia gets a call from a former colleague, Layla, who is aware of his financial troubles. He is introduced to Vukmir - a powerful, mysterious figure who offers him enough money to set him for life to star in a new film - but the catch is he is not allowed to know anything about the movie. He soon realizes this is no ordinary adult film and it may cost him everything. -- Chris Kavan

A film that doesn't just push the boundaries, it barrels through them on a truck filled with dynamite and nitroglycerin. Grotesque, disturbing, provocative, vile - the less you know going in, the better. If you have an iron stomach and an open mind, take the plunge, but be forewarned, it won't be pleasant but it will be unforgettable.

I have seen most if not all of the "most disturbing films ever made" that populate numerous lists on the web. Caligula, Irreversible, Salo, Cannibal Holocaust, Titticut Follies, August Underground, Baise-Moi, Martyrs, Gigli, et cetera et cetera. A Serbian Film in my opinion can never be topped in way of pure repulsion. It left me slack jawed the first 5 times I watched it. Talk about pushing art to the edge of reason. It contains just about every taboo known to common man. Rape, necrophilia, pedophilia, incest dominate the landscape in this perfect film. Many people claim it is a political or social commentary. I view it for the sick, twisted, humanity depraved piece of work it is. Like Salo or August Underground, this film must be viewed at least once in any cinephiles life.

Movies I Want To See by Prasanth

No posts have been made on this movie yet. Be the first to start talking about Serbian Film, A ( Srpski film )!